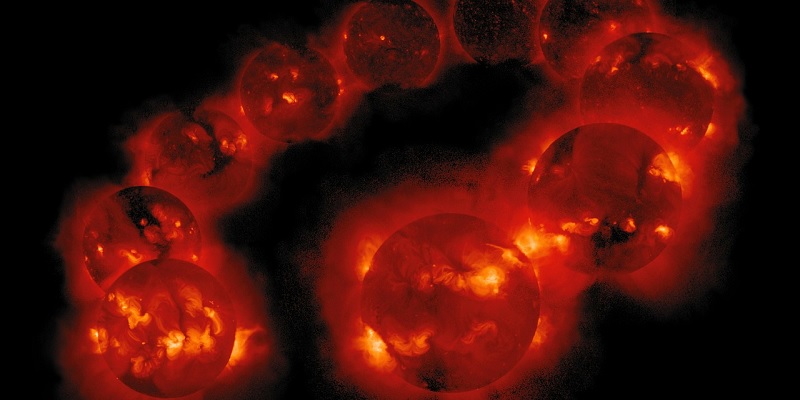 Solar Dynamo theory is concerned with the origin of the solar magnetic field. It is an exciting time for research into the solar dynamo — the problem of the origin of the sun’s magnetic activity. The beginning of the new Millennium has seen great increases in both theory (made possible by the breathtaking advances in computational power) and high resolution observations (driven by the recent and planned space missions). Taken together, these advances have significantly increased our understanding of the magnetic activity and variability of our nearest star.

The well-known eleven-year sunspot cycle is a manifestation of solar magnetic activity. Sunspots are cool dark patches on the solar surface which are associated with strong magnetic fields. They appear at mid-latitudes at the start of a cycle and migrate to the equator. Solar magnetic activity has been recorded since the early 17th Century following the invention of the telescope and the activity record can be extended back thousands of years using proxy data. These data (which include Beryllium records in ice-cores and Carbon records in tree rings) indicate that solar magnetic activity has `switched off’ for periods of up to 200 years in the past.

One such period of reduced activity called the Maunder Minimum occurred in the 17th Century when astronomers would report excitedly on any sunspots which appeared. These periods of reduced activity are known as Grand Minima. It is intriguing to note that the Maunder Minimum of solar magnetic activity coincided with the “Little Ice Age” — a period when the global terrestrial temperature was reduced. Indeed the possible links between solar variability and climate is a field of active research. Explaining the origin of the sun’s magnetic field is the fundamental problem of solar magnetohydrodynamics. This field underlies all solar magnetic phenomena such as solar flares, coronal mass ejections and the solar wind, and is responsible for heating the solar corona to such high temperatures. These phenomena may all have important terrestrial impacts, causing severe magnetic storms and major disruption to satellites, as well as having a possible impact on the terrestrial climate.

The sun is just one (of many) stars that exhibits magnetic activity. Observations of other stars, with varying properties (spectral types, ages and rotation rates) shows that the sun’s behaviour is not unique (although there are some stars which do exhibit cyclic behaviour) and that other modes of magnetic variability are possible. These observations are crucial for calibrating any proposed theory for solar magnetic activity. Solar (and stellar) magnetic activity is believed to be the result of a hydromagnetic dynamo The concept of a dynamo is familiar to anyone who owns a bicycle. A current is generated in a coil of wire if the coil is moved through a magnetic field.

A successful dynamo is one where the flows are large enough (and sufficiently complicated) to overcome the action of ohmic dissipation, which leads to the decay of field. The dynamo problem is complicated; an adequate explanation requires the self-consistent solution of the equation for the generation of magnetic field (the induction equation) together with that for the evolution of the fluid velocity (the Navier-Stokes equation). Moreover, these equations need to be solved at extreme values of the control parameters — a parameter regime in which the flow is turbulent and the magnetic field is highly intermittent and complicated.