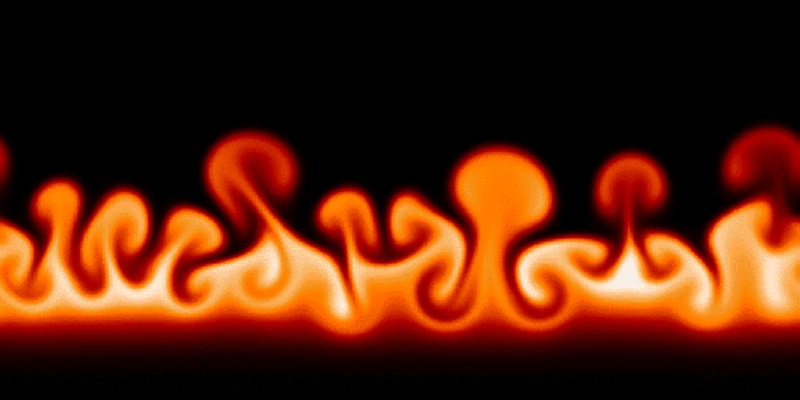 Our research focuses on magnetic buoyancy and pressure-driven instabilities.

Buoyant mushroomsSolar active regions are the surface manifestations of a deep-seated, predominantly toroidal magnetic field. Although it is generally agreed that the solar magnetic field is maintained by some sort of hydromagnetic dynamo, the mechanism by which this is effected is far from understood. Consequently the strength, structure and location of the interior magnetic field are similarly unknown. However, most recent solar dynamo models, despite their significant differences in other respects, postulate that the tachocline, the thin layer of strong velocity shear located at the base of the convection zone, plays an important role in the generation of toroidal field by the shearing of a weaker poloidal component. Inspection of active regions on the solar surface suggests indeed the emergence through the photosphere of a buckled, toroidal magnetic field. However, very little is known about the structure, strength and orientation of the sub-surface field.

It is therefore important to understand the nature of the initial escape of the magnetic field from the tachocline, its subsequent ascent through the convection zone, and its eventual emergence at the photosphere. A vertically stratified, horizontal magnetic field can be unstable to magnetic buoyancy instability provided that the field decreases sufficiently rapidly with height.

Pressure-Driven InstabilitiesIt is well-known from the field of thermonuclear fusion that a plasma confined by strong toroidal magnetic fields is generically unstable; in this context, Magnetohydrodynamic (MHD) instabilities are able to destroy the plasma configuration on very short time-scales. MHD instabilities include pressure-driven ones, whose linear growth is due to the destabilising interplay of the equilibrium pressure gradient and of the magnetic field line curvature. The excited pressure-driven modes include the so-called sausage mode, and are usually divided into interchange modes and ballooning modes; they share some common features with the Rayleigh-Taylor and magnetic buoyancy, or Parker, instabilities.

In astrophysics and geophysics, pressure-driven instabilities have been considered in the context of the Sun’s corona to explain solar flares and in the context of the near-Earth magnetotail where they may cause geomagnetic substorms. Turbulence due to pressure-driven instabilities may also provide the source of heat responsible for the high-energy emission which takes place in the interior of astrophysical jets, confined on large scales by strong toroidal magnetic fields.

All upcoming Fluids and MHD seminars can be viewed on the events section of our website.