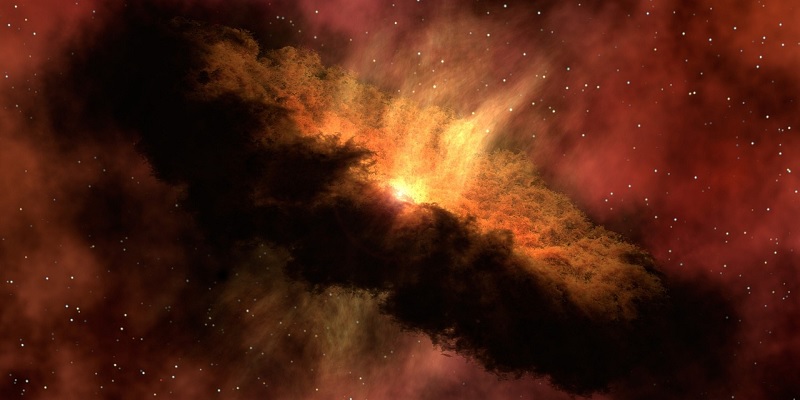 Massive astrophysical bodies such as forming stars or compact objects exert gravitational attraction onto the gas at rest in their surroundings. However, owing to the conservation of its angular momentum, the cosmic material falling in the gravitational well undergoes rapid rotation and, after the loss of the potential energy released in this process through radiation, tends to form a disc. In discs formed of sufficiently cool gas, the gravitational attraction of the central body is at first approximation balanced by centrifugal forces — as in planetary systems.

Such discs are found in a variety of astrophysical environments: around young stars where they are the sites of planetary formation, around super-massive black holes in the centre of active galaxies and around the compact stars that disrupt their companion in interacting binary systems.

Interestingly, some dissipative processes acting within the disc can drive a net radial transport of angular momentum outwards by modifying the radial balance. As a consequence of the removal of its angular momentum, the gas in rotation within the disc is accreted by the central body, i.e. it falls in further towards the centre of the disc and feeds the proto-star or compact object that produces the gravitational field.

Furthermore, the gravitationally stratified gas that forms the accretion disc can be partially or totally conducting electricity and can therefore interact with external magnetic fields (e.g. with that of a central star or large-scale jets) and with magnetic fields embedded within the disc. So, modelling the extremely rich and complex dynamics of accretion discs, which is central to modern astrophysics, calls for in-depth understanding of the physics and mathematics of rotating and conducting stratified fluids.

Accretion rates, which can be inferred from astrophysical observations, clearly indicate that the dissipative processes due to the microscopic properties of the gas cannot account for the transport of angular momentum in discs. Other mechanisms, such as turbulence or waves, must act as a means to remove angular momentum from the gas in rotation. The origin of the turbulence that might lead to this anomalous transport is still a matter of some controversy, particularly when the gas is a poor electric conductor.

However, there is a general consensus that the interaction of a weak magnetic field with the a hydrodynamically stable plasma in differential rotation forming the disc leads to a very powerful instability — the magnetorotational instability (MRI) — driving MHD turbulence. Interestingly, numerous numerical simulations of accretion discs indicate that the correlations of the fluctuating velocity and magnetic fields due to the MRI produce Reynolds and Maxwell stresses that transport angular momentum outwards.

The linear theory of MRIs is very well understood; however many questions remain unanswered regarding the nonlinear evolution of this instabilities, in particular the mechanism behind their saturation, the efficiency of the transport that they can achieve, and the effects of the vertical stratification and the geometry. One of the most interesting problems is that of the origin of the magnetic fields embedded within the accretion disc: the MRI acts as a self-sustained nonlinear dynamo, whereby the turbulent induction of magnetic field is driven by an instability caused by the magnetic field itself. It is however still unclear, for instance, how — and under what conditions — the generation of large-magnetic fields, if any, can result from MRI-driven dynamo action.