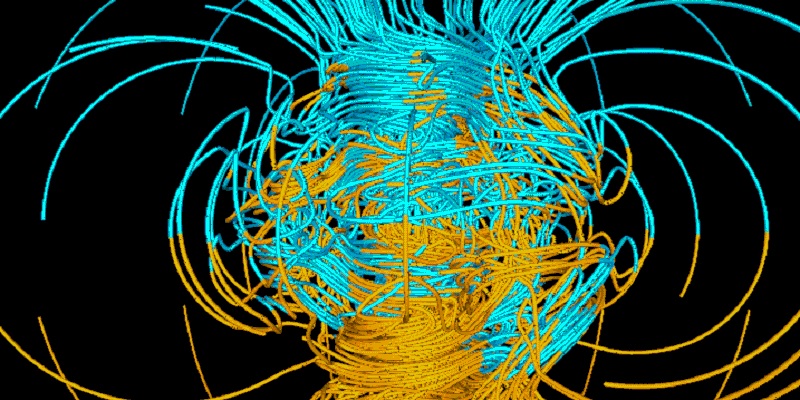 At Leeds, we are running dynamo codes and comparing their output with the important features of the geomagnetic field. Because the field depends on the rate of cooling of the Earth, we can use these codes to study processes going on in the deep interior of the Earth.

As the convection currents in the core circulate, they move the magnetic field around, and these changes (called the secular variation) are now continually monitored by satellites orbiting the Earth. We can compare the flows inferred from the secular variation observations with those found in our simulations. Because the motions are slow compared with the rotation of the Earth, the dynamical behaviour of the core is strongly influenced by the Coriolis effect. This gives rise to much counter-intuitive behaviour. Hot fluid does not simply rise, it can travel in a spiral motion, and this type of motion is particularly good at generating magnetic fields. An important part of our understanding of the dynamics of planetary cores comes from solving relatively simple problems which illustrate the behaviour of rapidly rotating fluids.

The magnetic field of the Earth also undergoes reversals, that is the field collapses and then rebuilds itself with the opposite polarity. This has happened many times in the past, as can be measured by studying the magnetic properties of rocks laid down in the distant past (paleomagnetism). The large scale field only changes slowly, on a thousand year time-scale, but the field-strength has fallen substantially over the last few thousand years, so another reversal may be imminent. Earth-like reversals are seen in some dynamo simulations.

Most planets have magnetic fields, which are also believed to be generated by dynamo action. Studying planetary magnetic fields enables us to explore what is happening deep inside the planets. Recent space missions have brought back a wealth of data about magnetic fields in the solar system, and dynamo modellers are currently trying to make sense of the results. Many surprising things have emerged. The giant planets in the outer parts of the solar system all have strong magnetic fields. It was not even expected that they would be sufficiently electrically conducting to allow dynamo action, but we are now starting to model the interiors of these planets. Mars used to have a dynamo powerful enough to magnetize its rocks strongly, but the dynamo switched off, exposing its atmosphere to erosion by the solar wind. It would clearly be of interest to know why this happened.