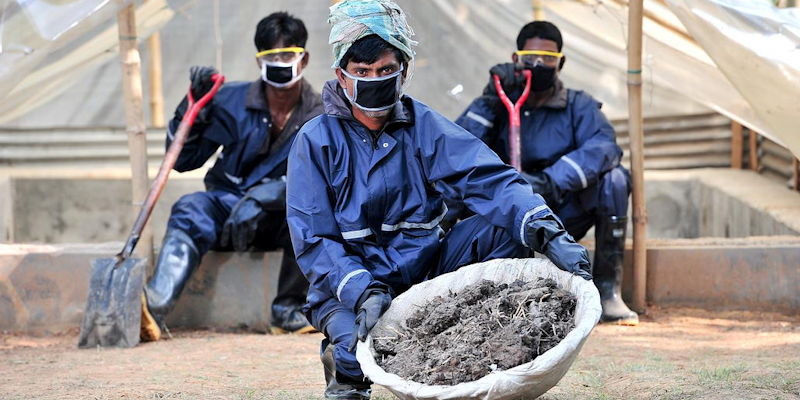 Go with the flow

If you live in the Mbagala neighbourhood of Dar Es Salaam, Tanzania’s largest city, it’s likely your toilet is a pit latrine, essentially a hole in the ground. That’s good: it means you’re not one of the city’s 50,000 residents who are forced to defecate in the open. But having access to a toilet is just the first step: it’s what happens next that matters.

Flush toilets, pit latrines or septic tanks have one thing in common - the human waste that goes into them eventually needs dealing with. It’s not an easy problem to solve, particularly in a fast-growing city, unless you have a realistic picture of what systems already exist and how well they work.

For anyone living in Mbagala - or in Korail in Dhaka, Bangladesh or many of the poorest neighbourhoods in the towns and cities of the global South - it’s no secret where most of the excreta actually ends up: on waste ground near their houses, in open drains or in the water sources. And, most probably, on their children’s hands when they’re playing outside, then on the food they’re handling and eating.

This is why sanitation underpins all other development goals, according to Professor Barbara Evans, Chair of the Institute for Public Health Engineering at the University of Leeds.

"Dealing with faeces can be seen as pretty mundane, but improving urban sanitation has a huge impact. Poor sanitation affects the ability of individuals and cities as a whole to thrive, both physically and economically. Urban sanitation isn’t just a technological problem, it’s linked to all aspects of the development jigsaw: health, public finance and economics, politics and policy as well as social issues.”

Figures from the World Health Organisation (WHO) back up these arguments. The WHO estimates that some 161 million children suffer from malnutrition and stunted growth as a result of poor sanitation, with over 340,000 children under five dying each year from diarrhoeal diseases.

Funded by the World Bank and the Bill and Melinda Gates Foundation, Professor Evans is involved in an initiative helping cities to take a new look at how to improve their sanitation.

The catalyst for this new approach is a deceptively simple diagram, which enables cities to see how, where and how much of their excreta is transported and treated - and where it isn’t managed properly at all. This practical tool has, aptly enough, a very prosaic name: Shit Flow Diagram or SFD.

Professor Evans, who is co-Director of the University of Leeds Centre for Global Development, explains:

"For many cities, it’s been a Eureka moment. Suddenly they can see where their resources can be best applied to improve the sanitation of the largest number of people. Every city has different infrastructure, regulations and economics around sanitation, but this helps cities choose interventions in those areas that will work best for them.”

The SFD shows what percentage of the population use which forms of sanitation, from open defecation, pit latrines and septic tanks (known as on site sanitation) or toilets linked to sewers. It then tracks how the excreta moves through the system and how much is safely contained or disposed of. By displaying the data in a simple diagram, cities can see at a glance how much of their faecal sludge is still being discharged untreated into the local environment.

The tool came out of a pilot study funded by the World Bank Water and Sanitation Program (WSP), which reviewed faecal sludge management in 12 cities across Latin America, Africa and South and East Asia. It’s now being taken forward through a consortium involving Professor Evans’ team at the University of Leeds, the WSP, the German International Development Agency, the Swiss Federal Institute of Aquatic Science and Technology, the Water, Engineering and Development Centre at Loughborough University, and the Centre for Science and Environment in Delhi.

Since the initial review in 2014, 50 cities across the world have used the open source tool, through a dedicated web portal at sfd.susana.org. It is also being used for national level assessments of progress towards the United Nations’ Sustainable Development Goals for sanitation. The goals themselves have been changed from simply assessing what percentage of a population has access to a toilet, to include whether the resulting waste is safely managed.

For some cities, using the tool has prompted a change in direction. The SFD for Dar Es Salaam, for example, showed that only nine per cent of the population use toilets connected to a sewer. As a result, the city, in discussion with the World Bank, decided to dedicate an equivalent percentage of the funding it receives for sanitation improvements towards improving systems for the 90 per cent of its population that use on site sanitation. Dar Es Salaam has some systems in place for safe emptying and disposal of faecal sludge, but the SFD calculates that 57 per cent is currently dumped illegally within the city.

Also in Tanzania, the city of Moshe rewrote its sanitation development plan based on its SFD. The tool highlighted that most of Moshe’s on site sanitation was emptied by illegal contractors and then dumped, as the government service couldn’t keep up with demand. The city is now regularising the private contractors and providing financial incentives to encourage them to dispose of the faecal sludge correctly.

Moshe is one of many examples where the tool has made an impact. "Living surrounded by shit - to put it bluntly - is not something people should have to accept as part of life,” says Professor Evans. "If we can help cities to safely move excreta away from where people live, to give them a cleaner environment, then the tool has done its job.”