Kingsley, a University of Leeds PhD researcher from Ghana, was among the first group of students selected for the Development in Africa with Radio Astronomy programme (DARA): a project supported by the Newton Fund and Global Challenges Research Fund.

DARA equips African radio astronomers with the expertise secure senior jobs in multi-country research programmes and to inspire generations of younger scientists and aspiring astronomers in their home countries. Kingsley met other select scholars to share space science expertise and use specialised equipment during a networking event at Goonhilly Earth Station, one of the project’s industrial partners, last year. 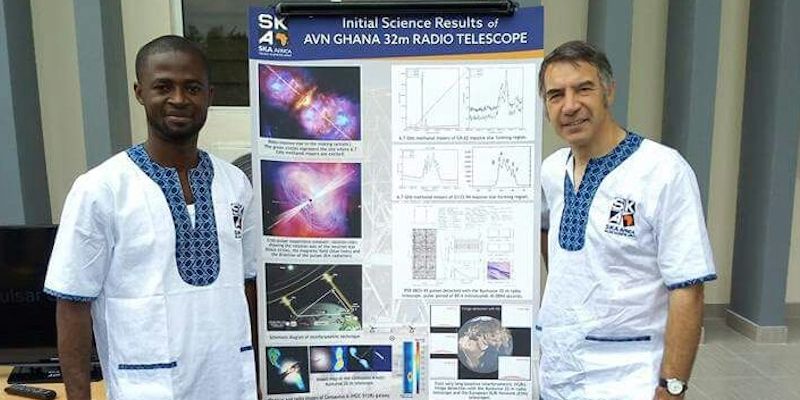 Kingsley and Melvin Hoare during the inauguration of the Ghana radio telescope, August 2017

Kingsley’s research includes investigating the impact that evolving high-mass stars have on stellar environments. He said:

“High-mass stars are massive stars who are rare, have a short lifespan, and spend most of their life embedded deeply within their molecular cloud. This can be seen in the night sky as what looks like a colourful burst or explosion in the galaxy. I am investigating the influence of high-mass stars on stellar environments at their early evolutionary stage by simulating a stage of evolution of the object and compare with radio observation.

“An ‘HII region’ is a cloud of interstellar atomic hydrogen gas which is partly ionized. Young high-mass stars are obscured by interstellar dust in the beginning stages of their evolution, which means they can’t be observed with an optical telescope. This issue can be overcome by using radio telescopes, which has inspired my research on the DARA programme.”

“Astrophysical masers are intense beams of light that can be seen within molecular clouds and in stellar atmospheres with radio telescope. These beams of light indicate that a star is forming, and can be observed to draw conclusions about the evolution of high-mass stars.“By using tested models, I will simulate an observed image of this colourful cloud of molecular gas, made up of masers, to learn more about the physical properties and movements of high-mass stars.”

Kingsley was one of the first students chosen to participate in DARA, a scheme which has helped him to realise his ambitions and gain valuable knowledge that will allow him to contribute to the economic and social development of Ghana. He presented on the DARA project and its benefits to Africa during the African Leadership Conference organised by the African Union held in November last year at Abuja-Nigeria. 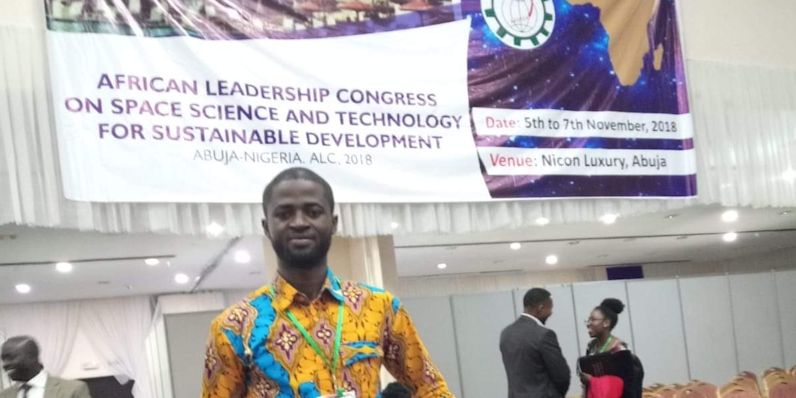 Since then, Kingsley has been appointed as the National Point of Contact for Ghana for the Space Generation Advisory Council (SGAC) in support of the United Nations Programme on Space Applications.

“I was first chosen as a Science Commissioning Team member of the African very-long-baseline interferometry (VLBI) network for the SKA project and trained as a telescope operator for the network. I then went on to pursue my PhD at the University of Leeds on the DARA programme.

“Following my PhD, I will be going home not only with the knowledge gained in astronomy but also with a strong family of people from the African network and beyond. Moreover, I can transfer the skills I have learned to different purposes in academia, research, and industry in developing countries like Ghana.”

“As a little boy from Juansa in the Ashanti region of Ghana, I had dreams and ambitions to study the stars and universe. I had no hope in actualising that dream after my senior high school days since there wasn’t a Bachelor or Masters degree for astronomers in Ghana.

"Now, thanks to DARA I am a trained Radio Telescope Operator. I have successfully undergone the basic programme in radio astronomy, participated in conferences and workshops sponsored by DARA, and I am currently a PhD student at Leeds, one of the world-class universities.

As a little boy from Juansa in the Ashanti region of Ghana, I had dreams and ambitions to study the stars and universe... Now, thanks to DARA I am a trained Radio Telescope Operator.

“When I return to Ghana, I will be in the right position to have an impact on individuals in the field of academia, with my knowledge, passion and interest in the stars and universe.”