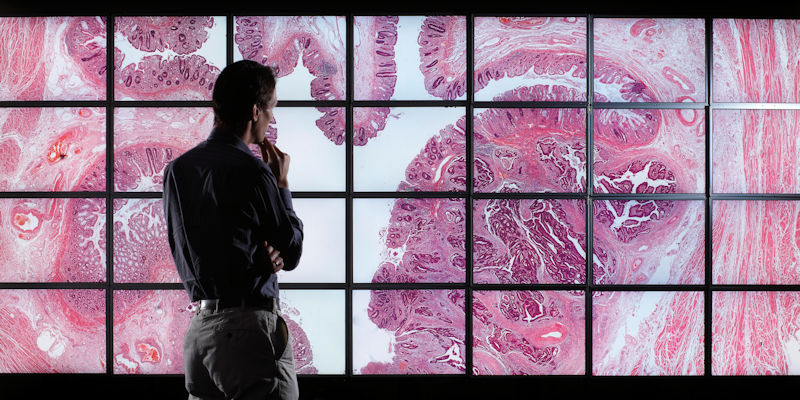 The Leeds Virtual Microscope (LVM) technology, the brainchild of Professor of Computing Roy Ruddle and pathologist Dr Darren Treanor, has transformed how pathologists view tissue samples from their patients. The technology/software is instrumental not only in diagnosing disease but also for treatment and ongoing monitoring of patients’ conditions.

Pathologists rely on samples mounted on slides for their diagnoses, traditionally viewing them through a microscope for ultra-high magnification. In the early 2000s it became possible to scan  slides to produce digital magnified images; but the images that resulted were so huge – a standard 5x2cm slide became a 10 billion pixel image –it was extremely difficult for pathologists to ‘navigate’ around such a large image.

Dr Treanor requested Professor Ruddle’s help in finding a better display system for viewing those digitally scanned slides. Professor Ruddle suggested using a new 28-screen ‘powerwall’ that the School of Computing built at Leeds, which enabled huge images to be viewed. Rather than using a single monitor, the powerwall harnessed 28 combined displays driven off seven computers to show one huge image (see main image above).

Professor Ruddle recalls: “Even such a large display can only show around 54 million pixels, so we could still only see a tiny proportion of the slide image, and we knew that we needed to develop interactive visualization software that was quite unlike anything in existence.”

We knew that we needed to develop interactive visualization software that was quite unlike anything in existence.

Professor Ruddle and his team started work on novel interactive visualization software, which would allow these huge images to be viewed in their entirety. Professor Ruddle says: “We had to rewrite the rule book on the design of interfaces for this type of task. The kind of existing technology found in PhotoShop or Google Maps simply doesn’t work when you’re dealing with such gigantic datasets.”

The software they developed is called the Leeds Virtual Microscope (LVM) and can render the relevant parts of the microscope slide in real time, letting users smoothly pan and zoom through the whole image. Pathologists can also diagnose a patient case more quickly by viewing all slides – often several different slides for one patient - in a single seamless view. In addition, the LVM allows pathologists to work on any computer - from a standard laptop to a powerwall.

Early funding for the LVM was provided by the Pathological Society of Great Britain and Ireland. The main research funding was provided by the National Institute for Health Research (NIHR), with further funding provided by the Engineering and Physical Sciences Research Council (EPSRC), the Medical Technologies IKC, and  the NHS Yorkshire and Humber Deanery. All of the research was a collaboration between the Schools of Computing and Medicine at the University of Leeds, and Leeds Teaching Hospitals NHS Trust (LTHT).

Initially the LVM was used for the specialist training for trainee pathologists, and then for diagnostic purposes. An extensive safety and validation study followed, involving 15,000 slides, in which consultants and trainees at LTHT compared the Leeds Virtual Microscope successfully against a conventional light microscope. The study resulted in the Royal College of Pathologists issuing its first set of Guidelines for Digital Pathology, published in 2018.

During this period, pathology at LTHT switched over to a digital system. Every slide – approximately 250,000 a year -is scanned and stored as a digital image. The benefits are numerous: the slides can’t get broken or lost; the tissue won’t fade, as it does eventually under glass; and if a pathologist wants a second opinion, they can easily share the digital image with another expert. And there’s a further advantage: digital images allow medical staff to take advantage of computer-assisted diagnosis algorithms, to support their own decisions.

In 2016, multinational healthcare company Roche acquired the LVM, incorporating the technology into its ‘uPath’ software for digital pathology. It’s now being sold around the world to diagnose cancer and other diseases in advanced healthcare systems.

Professor Ruddle says: “Our LVM software needed to be fully plugged into hospital IT systems to be relevant: to be connected to the workflow, the slide databases, the reporting systems and so on. Roche already had all those other components, and we were able to provide our proven virtual microscope design at exactly the right time. I’m delighted they chose to go down this path, and that the technology is in use all over the world. It’s a dream come true.”

If you would like to know more about this area of research in more detail, please contact Professor Roy Ruddle.