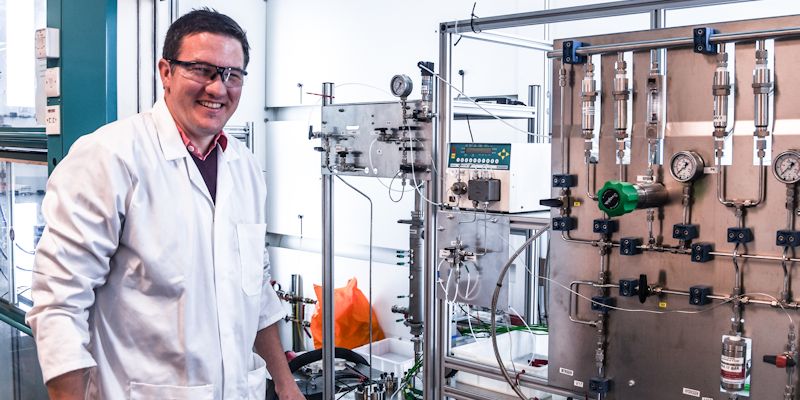 New medicines could be available to patients sooner because of a partnership between researchers at the University of Leeds and Astra Zeneca. By developing an ‘intelligent’ manufacturing process the scientists are transforming the way medicines and other chemicals are produced.

A medicine for treating resistant lung cancer, called Tagrisso, became available for patients just two and a half years after starting clinical trials instead of the usual decade. This required rapid development of the commercial manufacturing processes within the Chemical Development department at Astra Zeneca. Scientists from the University of Leeds and Astra Zeneca used ‘intelligent’ chemical manufacturing systems that can learn and self-regulate from the data they generate as part of this development.

This used technology, developed by Prof Richard Bourne from the Schools of Chemistry and Chemical Engineering, which is aimed at drastically cutting the time it takes to develop a new flow process used in the production of new medicines or other high value chemicals.

The research puts the University at the forefront of the drive to towards intelligent, or ‘cognitive’, chemical manufacturing systems, highlighted as one of the four ‘Grand Challenges’ in the UK Government’s 2017 Industrial Strategy.

Traditionally, it takes many months of manual experimentation and complex calculation to optimise a new chemical process for commercial production. The new, intelligent, self-optimising technology uses software to run test experiments and then learns from the data generated how best to automatically optimise and redesign the next set of experiments to improve the efficiency of the process. It removes the need for chemists and statisticians to run repeated, time consuming lab tests.

Working with Astra Zeneca over the past 5 years, through four PhD studentships, the team has developed expertise in digitally optimising chemical reactions, developing new algorithms and creating more efficient reactors. “This has led to increased capability within the company who now have an operational system based on that developed by Prof Bourne” said Dr Mark Purdie, Principal Scientist at Astra Zeneca.

To take the work forward from lab pilot to full scale industrial process, a new £2.0 million grant, from the Engineering and Physical Sciences Research Council (EPSRC), has recently been awarded to Prof Bourne’s team, who will lead a new consortium of industry partners along with academic collaborators from UCL and the University of Nottingham.

“Leeds is the central pillar of the consortium.” Richard Bourne explained, “We are the ones performing the majority of the experiments, developing the control and automation and providing the platform for UCL’s and IBM’s algorithms to be implemented from. We will be working with Astra Zeneca, IBM and new partners Promethean Particles, specialists in nanotechnology, and Swagelok Manchester”.

Dr Purdie said “Astra Zeneca believe this will deliver the next generation system where multiple systems could be combined and new optimisation algorithms developed to unleash the full power of the technology”.

The new industrial partners will all provide studentships and manufacturing case studies. Swagelok Manchester will contribute expertise in reactor design.

From the moment a new drug is patented the clock is ticking. It can take more than 10 years to get a new medicine from lab bench to commercial use because of the complexity of developing an efficient manufacturing process, in addition to rigorous patient safety testing. New technology which can shorten the manufacturing development process time safely is very valuable. Because the self-optimising technology developed at Leeds is computer-driven, it can run 24 hours a day, 7 days a week, meaning the most efficient process is reached faster and at lower cost than before.

By continually feeding the data from the automated lab bench experiments back into a cloud database, the system learns from the new data and automatically redesigns the next set of experiments. Fewer experiments are needed overall and human error is reduced as a result.

The system also produces better chemical reaction models which make it easier to scale up to commercial manufacture. This is good news for research scientists working in the industry because the chemist’s skills are still key to setting the experimental boundaries, guiding the system from the start and making sure the results make sense.

It changes the chemist’s focus from being in the lab doing repetitive experiments to actually generating understanding and interpreting the chemistry.

From lab bench to commercial production

The scientists at Leeds work first with a lab scale optimisation unit known as LabBot. This lab-bench experimental software/hardware platform is a series of syringes and pumps connected to a computer which controls the experiments via the cloud-based algorithm.

This digital system is designed to learn from the data that comes in which speeds up the experimentation stage. Going forward, the team will have four LabBots all working collaboratively on the same problem, which saves time by simultaneously running variations of the experiment.

The process is then up-scaled via the university testing plant PilotBot, which is a large scale reactor housed in the Institute of Process Research and Development (IPRD).

Better for the environment

Digitally optimising the manufacturing process in this way also benefits the environment, as better tuned processes mean less waste and greater yield of drug or chemical products from initial ingredients.

Over the whole manufacturing sector digitalisation is worth an estimated £455bn to the UK economy. New pharmaceuticals delivered to patients faster and cheaper is a major part of that.

As a lecturer at Leeds, Prof Bourne is quick to see the benefits of this research to his students, “it is very good for the University as it upskills a lot of people.” He said, “Because the system is so automated it allows MSc students with little time to generate high quality experimental results. There are a lot of opportunities in industry, with other major companies like Siemens, for graduates and postgraduates with these kind of digital engineering skills.”

If you would like to discuss this area of research in more detail, please contact Prof Richard Bourne.