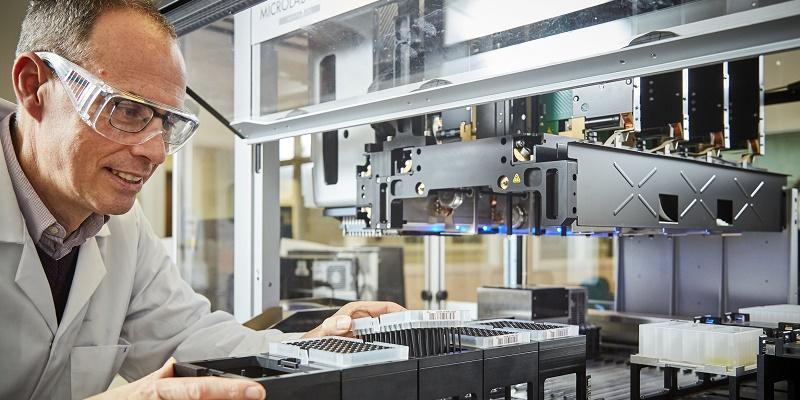 Around one third of drugs were inspired by nature. The cancer drug Taxol came from a tree bark; statins, which control cholesterol levels, were inspired by a molecule from a fungus. Unfortunately, the drugs that humans design rarely match the variety and complexity of these natural compounds. But Professor of Chemical Biology, Adam Nelson, is working to change that.

When scientists design drugs to target a particular protein, they generally use a single chemical reaction to make a series of closely-related compounds. They then purify these compounds and test whether they bind with the target as required. If none do, then it’s back to the drawing board to design a new compound series and begin the process again.

Professor Nelson has developed a faster and more versatile approach, which he calls ‘activity-directed synthesis’. Rather focusing on a specific series of compounds, his team designs a set of reactions that can yield many different series of compounds. The process can involve hundreds of reactions in one experiment, which throws up a very diverse range of compounds. These are tested to see which compound series are potentially useful, with the greater diversity giving a greater likelihood of success.

“In medicinal chemistry, when we design a set of molecules, we tend to focus on those we’re very confident we’ll be able to make,” explains Professor Nelson. “We typically want to use highly reliable reactions with a low failure rate, but the result is, the molecules we investigate tend to be very similar. Our new approach can speed up the process, by allowing us to create and test multiple compound series in one experiment. But what’s most exciting is that we'll be able to discover completely new classes of functional molecule.”

Most exciting... we'll be able to discover completely new classes of functional molecule.

The process essentially mimics how nature works. Through evolution, mutation of DNA changes the structures of proteins that can then change their function. Many of these new functions are of no benefit, but occasionally a change will improve how the protein works – and it’s these beneficial mutations that are retained.

In partnership with the Rosalind Franklin Institute, which aims to develop new technologies to transform life sciences, Professor Nelson is working to fully automate his activity-directed synthesis approach.

He and his team at the Franklin are using robots able to set up hundreds of reactions. The analysis of the outcomes of these reactions, and the testing of the compounds they produce, is also fully automated.  Algorithms then drive the design of further reactions on the basis of the function of the compounds that have been obtained.

Our aspiration is to make this a fully autonomous process... the whole discovery cycle would be automated and driven by algorithms without any human intervention.

Professor Nelson says: “Our aspiration is to make this a fully autonomous process. We aim to develop algorithms which determine which reactions to do next – driving improvement of the most exciting compounds still further. So effectively, the whole discovery cycle would be automated and driven by algorithms without any human intervention.”

If you would like to discuss this area of research in more detail, please contact Professor Adam Nelson.