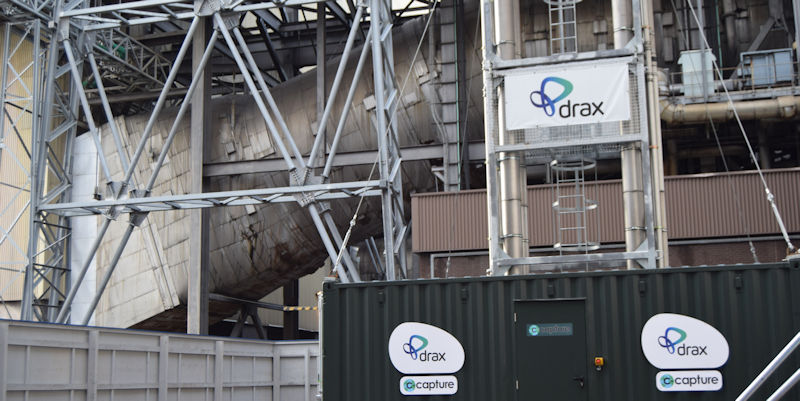 Carbon capture and storage (CCS) is an important technology in tackling the carbon emissions that are driving climate change. However, the standard processes of separating carbon dioxide (CO2 ) from the gases emitted by power stations, and heavy industry such as oil refineries and cement manufacturers, use amine solvents. Amine-based technologies require a substantial amount of process energy, and the solvents degrade relatively easily reducing their performance over time.

An alternative method, developed by Chris Rayner, Professor of Organic Chemistry at the University of Leeds, and his team of co-workers could be the answer. Using a solvent based on readily-available chemicals, the new technique can successfully separate and capture carbon dioxide from industrial flue gases. The solvent has a much longer lifetime than amines, can be reused in the process, and is environmentally benign. Most importantly, the process also uses far less energy to separate the CO2 .

In 2010 Professor Rayner founded a spin out company, C-Capture to develop the technology, initially working from University of Leeds laboratories with a small team of chemists and engineers. Professor Rayner recalls: “Ten years ago, very few people were taking carbon capture seriously. Climate change, and the methods necessary to address it, were just not getting the publicity or funding they needed. However, we recognised the benefits the technology offered, particularly in its ability to decarbonise industry and potential to deliver negative emissions via bioenergy with carbon capture and storage.”

We recognised the benefits the technology... particularly in its ability to decarbonise industry and potential to deliver negative emissions via bioenergy with carbon capture and storage.

Initial support for C-Capture came through small scale investment by IP Group, which provided the time and resources to confirm the viability of the approach. This enabled funding to be secured from other sources such as the UK Government, which provided a £1 million grant from its Energy Entrepreneurs Fund in 2017. In 2018, C-Capture partnered with Drax, the UK’s largest power station, in a £400,000 pilot project to capture the carbon dioxide generated in the combustion of 100% biomass. It was the first such venture in the world, and by 2019 the pilot was operating at around 1 tonne of CO2  per day. The project won the ‘Breakthrough of the Year’ Award in the 2019 Business Green Awards.

The Drax project’s success led to a grant of £5 million from the UK Government’s Department of Business, Energy and Industrial Strategy, in order to carry out trials with highly experienced international research partners SINTEF. C-Capture was listed in the 2021 Global Cleantech 100 report as one of the companies best positioned to contribute to a more digitized, de-carbonized and resource-efficient future. It currently has major investment from Drax, BP Ventures and IP Group, as well as ongoing support from the University.

Unsurprisingly, C-Capture has grown in recent years and now has 26 employees. Its next step will be to demonstrate the technology at scale. Although capturing 1 tonne of CO2  per day may sound like quite a lot, an average power station – as with other industrial sources – may emit many thousands of tonnes of CO2  per day, so the current priority is further development for scale-up. The company is also exploring commercial opportunities across industry, including waste to energy, glass, cement, steel, ceramics, paper and oil refinieries.

Professor Rayner says: “We’re confident that the technology will ultimately step up to the required capacity and make a major contribution to combatting climate change. Most importantly, the entire CCS sector needs the infrastructure and investment to allow full scale deployment of the technology, including a CO2  transport and underground storage network. As the prospect of a zero carbon economy comes nearer, I’m sure that will happen, and we are already seeing positive signs in many parts of the world, including the UK.”

If you would like to discuss this area of research in more detail, please contact Professor Chris Rayner.