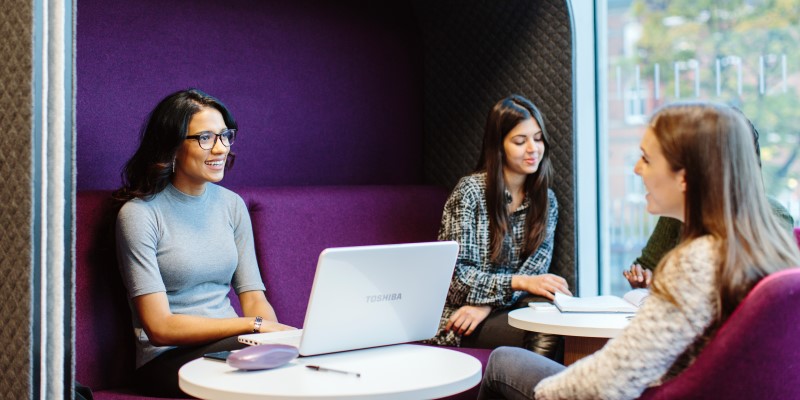 The Margaret Steel Innovation Award is a £1,000 prize awarded to female engineering and physical sciences students who show a particular aptitude for innovation, and initiative to develop an idea or invention with funding support. The Award is organised by the Faculty Equality and Inclusion.

The award is open to all female undergraduate, Master and PhD students in the Faculty of Engineering and Physical Sciences.

The University of Leeds was chosen as the launch pad for the Scholarship because of its international reputation for innovation.

The award is in memory of Dr Margaret Steel, who was often thought to be eccentric in some of her ideas but in actuality her ability to “think out of the box” led her to become one of Imperial Chemical Industries Plc’s most prolific inventors. In her will, she requested that the Steel Scholarship Fund be created to provide awards to students who have this spark for innovation, thereby allowing others to continue the path she had followed throughout her life.

The Margaret Steel innovation award closely aligns with our equality and inclusion initiatives to attract, inspire and support students from diverse backgrounds to undertake research and innovation careers.

The Faculty of Engineering and Physical Sciences is pleased to announce the third year of the Steel Innovation award.

The theme for this year’s award is Climate Change.

Applicants are welcome to apply with any ideas related to climate change in a broad sense, such as a low carbon future, resilience and sustainability. Your innovation idea can be linked to your studies or can be something from your personal interest, hobby, passion.

All female undergraduate, Master and PhD students in the Faculty of Engineering and Physical Sciences are invited to apply. Both individual and group applications are welcome providing all applicants meet the eligibility criteria.

For further information about the award, please email Kristen Turner at K.Turner1@leeds.ac.uk.

More details about their projects are available here.

More details about their projects are available here.

Dr Margaret Lilian Steel was born in Guisborough on 30 November 1928. She spent her early childhood in India, where her father was an engineer in the civil service, and she was home taught by her mother. They returned to England just before the outbreak of World War II, where Margaret continued her education in mainstream schooling.

Margaret was always inquisitive as a child and when she left school, encouraged by both parents, she decided to study for a degree in Physics at Bedford College in London, an unusual choice of subject for women at that time.

Armed with her degree, Margaret embarked on a scientific career with Imperial Chemical Industries (ICI), where she stayed until retirement age. Within the company, she was often thought to be eccentric and many of her ideas were considered by some as “crazy”, but her ability to “think out of the box” led her to become one of the company’s most prolific inventors.  As an example of her work, she was responsible for the science behind a biodegradable wound dressing and a fabric that is widely used in wallpapers and to stick on surfaces to prevent slipping.

After her retirement from ICI, she worked with a private company on the development of carbon ceramic composites, where her innate ability was called upon to find solutions to scientific barriers that arose throughout the process.

Margaret continued to work until, very sadly, she was affected by Alzheimer’s disease in 2005. However, with the help of medication, she maintained her ability to question the world and discuss science until her death from heart failure in June 2014.

Having never married and with no surviving family, it was Margaret’s wish that her money be used to help young scientists to become the inventors of the future. In her Will, she requested that the Steel Scholarship Fund be created to provide awards to students who showed a particular aptitude for innovation, thereby continuing the path she had followed throughout her life.