Rithik is an Architecture student, currently in his third year. He’s found the environment to be one where everyone’s learning from each other, relating that “the best part of the course is that you get to collaborate with all different kinds of people with different experiences, knowledge and ideas about everything from architecture, engineering and life itself.”

Leeds wasn’t Rithik’s first choice university initially, but he came to realise that the course here suited him well, as it combines both the design and engineering aspects of architecture.

“In the end, Leeds was a perfect fit for me,” he says, “the learning played to my strengths but also developed my weaker creative side that I was curious to explore. Most architecture schools only focus on engineering or design, this focuses on both which is very valuable.”

In the end, Leeds was a perfect fit for me.

One aspect of university life that daunted Rithik a little was making new friends, but he advises to relax and be yourself – there are plenty of places to meet people including your accommodation, your course and when you join societies.
“I was scared when I was trialling for the Civil Engineering football team, but you have to put your fear aside and believe in yourself and take the leap.”

Rithik is now the captain of the football team, so taking the leap paid off for him! Additionally, he had some concerns about whether he’d find the course too difficult but relates “everything new is hard at first but dedication, putting in time and effort makes it a lot easier, and it becomes rather fulfilling”. He advises students to seek advice if they’re find something tough, and that peers and lecturers in the School are always willing to help.

In second year, Rithik and his peers were given an exciting project to create a concept design for a Market Hall in Headingly, which included a brief with certain criteria about the design’s size, function and sustainability.

Rithik relates that “We had 14 weeks to fully design a suitable scheme that would in essence act as a functioning market hall in the community. To help us with the process, each week external practising architects would meet with us and discuss our designs and ideas. It was so interesting to see an expert talk about what’s good about your design and what you can improve, they really know their stuff, like its actually mind-blowing.”

At the end of each school year, the School holds an Architecture Show, exhibiting some of the work created by second, third and fourth year students.

It was a real highlight when I saw my work on the wall and I could later explain the idea behind it to people.

“It was a real highlight,” says Rithik, “when I saw my work on the wall and I could later explain the idea behind it to people. It was amazing to see the cool designs from all the students and to speak with other academics about their PhDs was very fascinating.”

Joining the Civil Engineering football team has been a great social point for Rithik, “to play the game I love with a completely new set of lads that are now my friends for life is great.”

He’s also attended a National Hindu Society event at the Union. At this event, Rithik says that he “got to speak to people from all over the world who had the same family and childhood experiences that I had had but could never share with others. There’s something refreshing about talking to someone of the same culture after not being able to be fully open about it before.”

Learning continued outside of the classroom when Rithik took a summer placement at J B Langley, a small architecture and structural engineering firm. “I learned so much about the industry and how a corporate workplace is run. I also learnt so many valuable skills that will make my project work at university even better.” 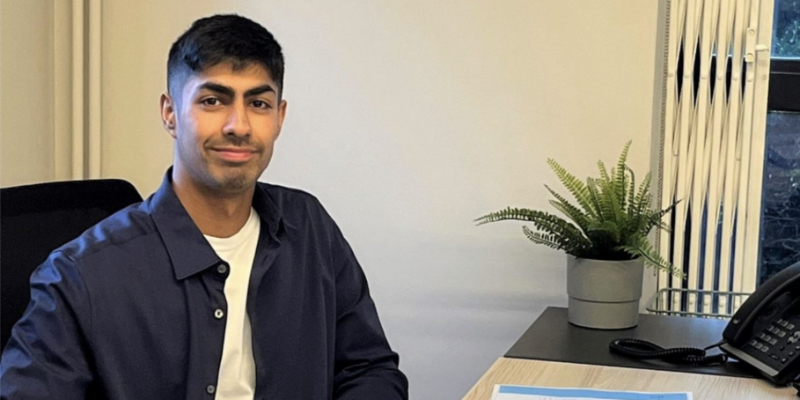 Rithik at J B Langley Associates

After university, Rithik would like to create solutions that help improve people’s lives, especially those living in areas of poverty.

Architecture truly is the facilitator for so many memories of people’s lives and I want to create spaces for those moments.

“I’d like to build schools, libraries and gyms - places where people really improve themselves and learn things about themselves and their place in the world. Architecture truly is the facilitator for so many memories of people’s lives and I want to create spaces for those moments.”

To find out more about studying in the School of Civil Engineering, view our Undergraduate courses.