Faculty of Engineering and Physical Sciences news Monday 22 May 2017 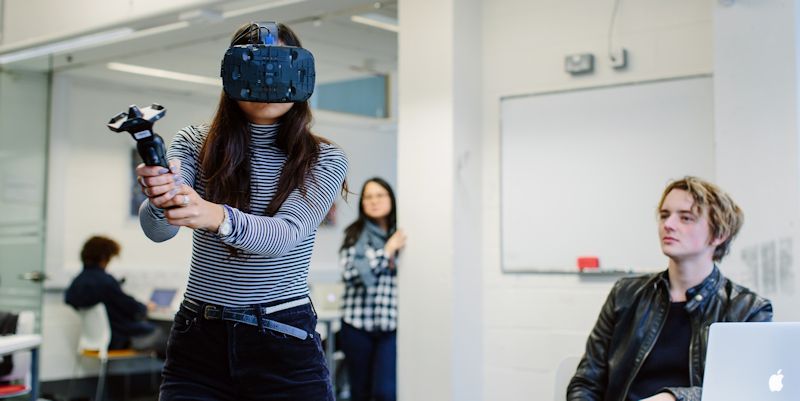 The north’s best student-led project work was showcased to gaming industry experts in an event which featured a talk from the Microsoft HoloLens team.

The University of Leeds partnered with Game Republic to host its annual student showcase on 8 June.

Up to 25 teams of students from 9 universities and colleges in the region presented their final year project work to be judged in four categories.

The annual student showcase, now in its tenth year, aims to promote the significant gaming development industry which is based in the north, and to encourage the brightest and most committed students to stay in the region and build their careers after graduation.

Each project was judged by representatives from Sumo Digital, Revolution Software, and Red Kite Games with prizes awarded to the best projects in the following categories - Game Design, Game Art, Game Technology and Best Team.

University of Leeds students studying on computer science courses competed against their peers from the other colleges and universities in the north of England.

The event is an opportunity for students interested in working in the games industry to show their skills and knowledge to employers while their project work will expand their portfolio and give them early experience working with other developers.

The University of Leeds’ partnership with Game Republic began with the launch of two specialist gaming courses – a four-year MEng and one-year postgraduate Master’s degree – developed with industry in order to tackle a severe technical skills shortage in the UK.

Dr Hamish Carr from the University of Leeds School of Computing said: “The showcase is one of the best opportunities for our students to meet future employers in the gaming industry and show the level of skill and knowledge they have developed. By explaining their projects they will show the industry awareness they have developed and the skills needed to be a valuable member of a workplace team in a highly technical industry.

“Bringing our students together with the best of other universities across the north of England gives them a chance to meet with like-minded people to forge potential partnerships for the future as well. This could lead to start-ups, research collaborations and other opportunities.”

“We’re delighted to be hosting the tenth Game Republic Student Showcase in partnership with the University of Leeds. Over the last decade, the event – which is the biggest of its kind in the UK - has resulted in dozens and dozens of placements and full-time jobs for graduates in the region’s games industry. We’re hoping that the event on 8th June will kickstart more successful careers in games.”