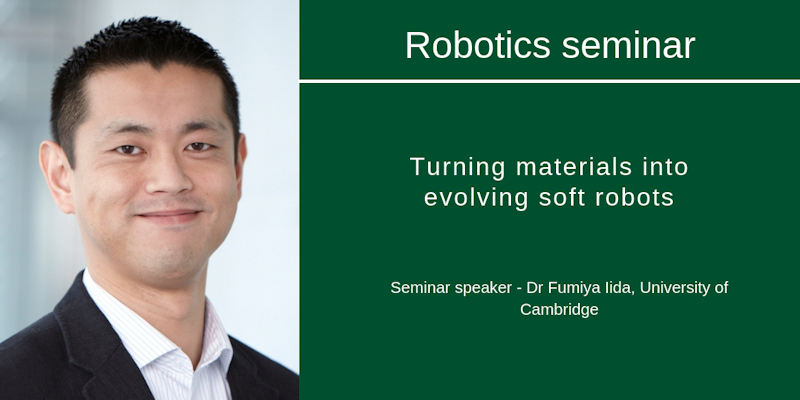 Join Robotics at Leeds for their next seminar on bio-inspired robotics, with guest speaker Dr Fumiya Iida from the University of Cambridge.

Robots have been successful in the applications which require speed, power and precision, but very limited where soft and delicate interactions are necessary. In this context the use of soft functional materials opened the door to a range of new types of machines, soft robots, that can not only interact with soft objects in the environment but also make robots themselves into soft structures for better adaptability in different situations.

Dr Iida and researchers from the University of Cambridge have been exploring a set of alternative technologies to design and construct complex soft robots, such as multi-material 3D printing, electrically conductive elastomers, and model-free design automation processes. With the recent rapid progress of these technologies, they are able to develop new kinds of robots that can be characterised as morphologically computing machines. They are exploring how such a new paradigm of design processes can be realised, though there are a number of known challenges such as design of complex mechanical structures, sensing of physical interactions, and modelling, simulation and control in general. In this talk, Dr Iida will introduce some of the recent soft robotics projects and their extension to model free design automation.

His research interests include; biologically inspired robotics, embodied artificial intelligence, and biomechanics. He was also involved in a number of research projects related to dynamic legged locomotion, dextrous and adaptive manipulation, human-machine interactions, and evolutionary robotics. In 2004 and 2005, he was engaged in biomechanics research of human locomotion at the Locomotion Laboratory, University of Jena, Germany. From 2006 to 2009, he worked as a postdoctoral associate at the Computer Science and Artificial Intelligence Laboratory, Massachusetts Institute of Technology, USA.

Find out more about Robotics at Leeds via the website.