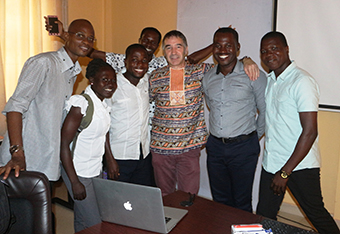 When you think of big science projects – and in particular, space science – Africa is not the continent that springs to mind. But eight countries across Sub-Saharan Africa are set to take part in the

Kenya, Zambia, Namibia, Botswana, Ghana, Madagascar, Mozambique and Mauritius are due to host radio telescopes in the second phase of the Square Kilometre Array (SKA) – a major international effort, which will see thousands of dishes installed across Africa.

The aim of the project is to provide approximatively a square kilometre of collecting area, to enable astronomers to study the sky in unprecedented detail and survey the sky much deeper than ever before. The project will allow the collection of radio signals that objects in space emit, which will help tackle questions such as how stars and galaxies are formed and how they evolve over time.

In the first phase of the project, South Africa’s Karoo desert will host a couple of hundred dishes, with construction due to start in 2018. In the second phase, the telescopes are extending across sub-Saharan Africa.

Radio astronomy as a discipline is mostly non-existent in the eight countries taking part in Phase Two of the SKA: it is not taught at universities and there is no research undertaken in the discipline. So a ‘precursor’ project is underway, converting large but defunct satellite communications dishes into radio telescopes. The first country chosen to be the first to have a telescope converted is Ghana.

Thanks to a Newton Fund grant in 2015, this initial work with Ghana led to the Development in Africa with Radio Astronomy (DARA) project, expanding to include Kenya, Zambia, Namibia and Botswana. A further £2.7million from the Newton Fund, awarded this year (2017), means the DARA project can now continue until 2021, with all eight countries in the SKA taking part.

The concept is simple: each year, in each country, up to ten graduates in physics or another relevant discipline undergo basic training in radio astronomy, delivered in four intensive, two-week units. Trainees can then choose to study for a Masters degree or a PhD, in either South Africa, the UK or Mauritius.

To date, 70 trainees have undertaken the basic programme, with four now studying for a Masters and a further three studying for a PhD in the UK funded by the DARA programme. A similar number are undergoing advanced training in South Africa and their home countries as part of the project. Others have used the training to help win their own places on Masters and PhD programmes.

Professor Melvin Hoare of the School of Physics and Astronomy at Leeds explains the positive impact of the project on Africa as a continent: “By creating sustainable radio astronomy groups that can operate and exploit the telescopes in each country, we can help Africa make a real success of the SKA. That will be inspirational and transformational for each country’s aspiring young scientists and the continent as a whole.”

PhD student Naomi Asabre Frimpong is determined that radio astronomy becomes one of Ghana’s strengths. “I want to see real science undertaken using Ghana’s telescope,” she says. “There’s no point being in the SKA just for the ride, we need to be contributing to global understanding of space.

Women are a minority in the radio astronomy community, so it’s also exciting that I can act as a role model to get girls interested in science.”

Willice Obonyo had just completed a Masters in Astrophysics in South Africa when he saw the advert for a basic radio astronomy course in his native Kenya.

“Astrophysics isn’t a developed discipline in Kenya, but I knew we were due to have a telescope converted and thought this would enable me to use my new qualification back home.

I’m looking at data that no-one else has studied yet, which is quite challenging but also very exciting.

Radio astronomy has taught me far more than I ever imagined, because it has applications in so many fields. What I want to do is go back to Kenya with the skills and knowledge I’m gaining in the UK, so I can train others and transfer that knowledge to my country.”