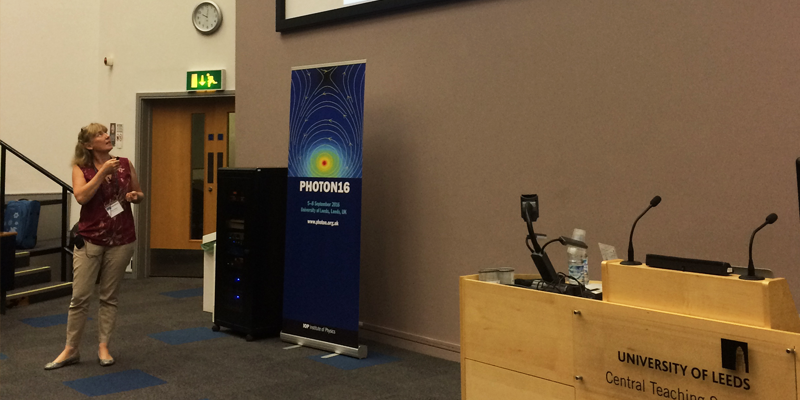 The University of Leeds hosted the largest Optics and Photonics conference in the UK. PHOTON16 is the eighth in a series of biennial conferences that started in 2002.

This year, we welcomed more than 400 participants from 26 countries.

Scientific sessions were complemented by a technical exhibition with 37 companies presenting their products. We were especially pleased to welcome seven world renowned plenary speakers to the conference.

The PHOTON series brings together wide areas of light related science and technology that represent the strength and breadth of activity in the UK and elsewhere in the world. Our scientific presentations encompassed the classical and quantum nature of light and covered applications ranging from bio-photonics, through metrology to ultrafast optics.

During the conference, several honours and prizes were announced. For example our very own Helen Gleeson (Head of the School of Physics and Astronomy in Leeds) was invited to present the Rank Prize Funds Lecture (see picture).

This PHOTON conference was organised on behalf of the Institute of Physics, especially the Optical Group, the Quantum Electronics and Photonics (QEP) Group, the Quantum Optics, Quantum Information and Quantum Control (QQQ) Group, the Instrument Science and Technology (ISAT) Group, the Computational Physics Group and the Environmental Physics Group. Our current programme builds upon a long history of meetings and conferences organised by the groups. These stretch long before the first PHOTON conference, which was held in Cardiff in 2002.

More information can be found on the PHOTON website.