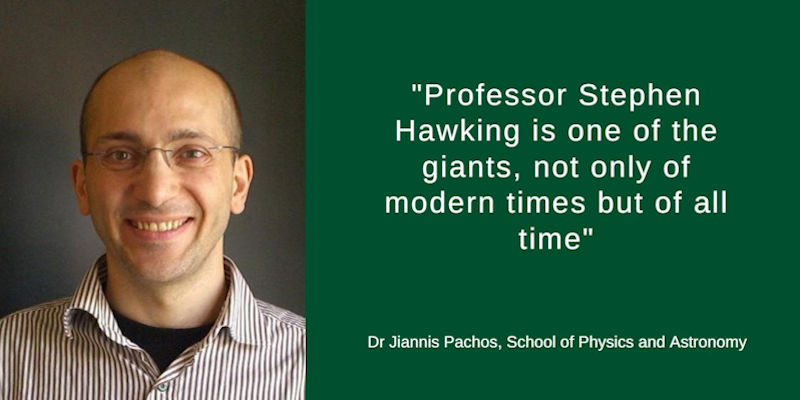 Dr Jiannis Pachos talks about his memories of meeting Professor Stephen Hawking, who has died aged 76.

Like countless other young scientists he was inspired by Professor Hawking’s work. “With his popular books he made me want to become a physicist even more, so he inspired me from a young age.”

Dr Pachos first met him as a PhD student at Durham University when Professor Hawking gave a talk at a conference in the city. “Watching him coming on stage in his wheelchair and communicating through a computer, which takes a lot of effort, was a humbling experience.”

He later spent three years at Cambridge University working in the same department as Professor Hawking. “He has very active, he would attend several talks and there would be often people from the TV to interview him. He was very easy-going, he would join people for lunch and he was very approachable."

“He was a very daring physicist who wasn’t afraid to make mistakes. He worked on very difficult and complicated topics that require detailed knowledge of physics and yet he was able to do this and explain it in a way that people could understand. He is one of the very few scientists that is hugely appreciated by specialists and the public alike.”

Dr Pachos believes Professor Hawking’s legacy will last for centuries to come. “He’s up there at the top there’s no question about it. He’s one of the giants not only of modern times but of all time.”

Find out about Dr Jiannis Pachos research interests and PhD projects which are currently available by visiting his staff profile.