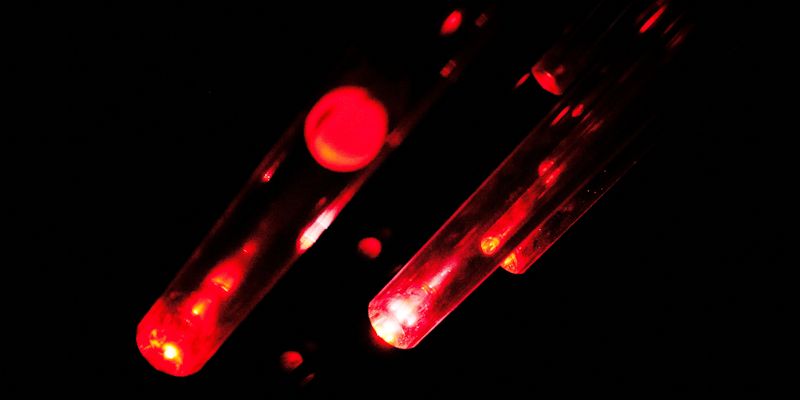 As a Physics and Astronomy PhD candidate in Quantum Information, Diego Valles formed the installation with Scientific-Artist Cat Scott. Cat led the coordination of the project, as well as the concept, design and making of the sculpture and found exceptional collaborators to join their team.

It was supported by The Superposition collective – a collaboration network for artists, makers and scientists. The installation was a representation of key parts of Diego's collaborative research, which is entitled as follows:

Dominic Hopkinson, Artist in Residence at the School of Mathematics, and member of The Superposition, introduced Diego to the network, which was also promoted by the Public Engagement at the University. As a culmination of a six-month project, Diego, Cat and their team showcased the installation for the very first time at Light Night Leeds. Diego explains:

"The success of the project possible thanks to the zest and hard work of all the members of the team. I would like to encourage all the students of a STEM degree in participate in this kind of outreach activities, as it provides the opportunity to promote your research and raise the interest of the public in sciences and technology. In my case, this activity was also a priceless occasion to meet and collaborate with outstanding people."

I would like to encourage all the students of a STEM degree in participate in this kind of outreach activities... it was a priceless occasion to meet and collaborate with outstanding people.

While the installation was a success, it is only the beginning of the endeavour. Cat designed the piece in a way that makes it mobile and easy to install - meaning it is a highly versatile piece of design. Once Diego, Cat and their team have refined and polished the project further, they plan to present it at several venues that fit into an art-science-technology-innovation context, not only in Leeds, but also nearby regions and eventually nationally and internationally.

In the installation, small floating balls oscillate at a regular phase with a small detuning between them, describing a wave-like pattern. It is meant to depict the dual particle-wave nature of the electron in an atom.

The balls are illuminated using strobe lights, which generates an afterimage effect and the illusion of them being in different positions at the same time; this is an illustration of a state superposition as described by quantum mechanics.

The illuminating light shifts from red to green and back to red to represent a change in the energy levels of the atom by the interaction of a gravitational wave - one of the findings from Diego's research.

About Diego, Cat, and their collaborative team

Diego pursued his interest in public engagement having participated in various outreach activities – he has also written two articles for The Conversation: Giant atoms could help unveil ‘dark matter’ and other cosmic secrets, and How giant atoms may help catch gravitational waves from the Big Bang.

With support from Professor Ben Whitaker (School of Chemistry), who is also one of the founders of The Superposition, Diego and Cat were able to realise their installation vision. Diego and Cat were able to network with many artists, scientists and makers while in-residence at ASMbly Lab 2017, and event organised by The Superposition. This is also where they prototyped their artwork and found an outstanding team of collaborators, including:

Diego and his team gratefully acknowledge Leeds City Council for part-funding the project.

For more information about Diego and his research, get in touch by email.