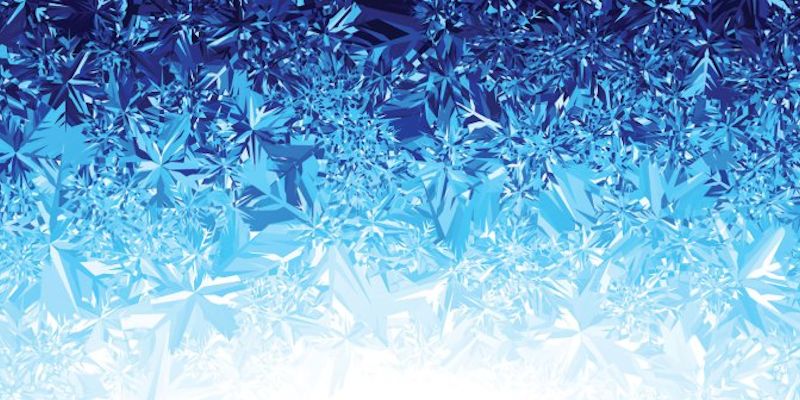 Research by Dr Hugo Christenson, School of Physics and Astronomy, gives in-depth insight into why crystals first form in topographical defects, like cracks and crevices.

How topography affects crystal formation has been the topic of extensive scientific research. It has long been known that crystal nucleation - the first process in the formation of a crystal - almost always occurs on a surface. Ice crystals in cirrus clouds in the upper atmosphere will form on a small aerosol particle rather than in the air itself - but the physical and chemical properties of surfaces that are conducive to crystal nucleation are still not clearly understood.

Dr Christenson, School of Physics and Astronomy, has conducted recent research that seeks a clearer picture of the topographical properties that promote nucleation, which is the focus of his research.

Dr Christenson has studied various aspects of phase change dynamics to investigate what variables affect crystal nucleation. Drawing on the Classical Nucleation Theory (CNT) - which describes how physical attributes, such as defects or crevices on a surface, foster nucleation - Dr Christenson, as a result of his extensive research, has devised several experiments to study precisely the effect of these physical features.

Demonstrating the dependency of nucleation

Using three different experimental approaches, Dr Christenson has demonstrated the dependency of nucleation on surface defects. In agreement with CNT expectations, the cracks on a surface reduce the height of the energy barrier to nucleation. Put simply, these cracks allow molecules to congregate for longer than they would be able to on a flat surface, increasing the likelihood that they will nucleate.

Dr Christenson’s research shows that mechanically produced surface defects can increase both the rate and density of crystal formation. His research has now extended to include crystal nucleation from solutions and pure liquids with results that correspond to his work on vapours - which has increased our basic understanding of how crystals form.

Importantly, it also suggests that the engineering of nanoscale topographical features has real potential for control of heterogeneous nucleation, although this remains a significant challenge. Careful implementation of crystallisation techniques would allow for applications in industry (for example, chemical vapour deposition) and medical diagnostics (understanding how kidney stones form) as well as others.

Increasing the rate and density of crystal formation

The results from Dr Christenson’s research shows that mechanically produced surface defects can increase both the rate and density of crystal formation. The three approaches Dr Christenson untertook are as follows:

Dr Christenson’s collaborative research has shown how amorphous calcium carbonate (ACC), the precursor phase to the biominerals calcite and aragonite, may be stabilised by confinement alone, without the need for specific interactions with biomolecules. In the presence of polymers like polyaspartic acid ACC will enter submicron pores via capillary action. When the ACC eventually crystallises to calcite, single-crystal nanowires of aspect ratios as high as 100 are produced.