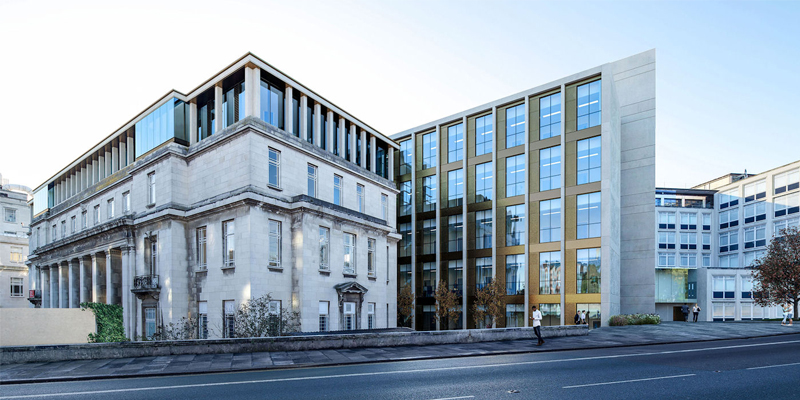 The University is to name a key building in its £96m investment in engineering and physical sciences in honour of one Leeds’ most influential scientists.

Sir William Henry Bragg won the 1915 Nobel Prize in Physics with his son Sir William Lawrence Bragg, for the development of X-ray crystallography.

Their work revolutionised science by allowing researchers to examine the atomic structure of materials in detail for the first time.

Now the Sir William Henry Bragg Building will form a key part of the new developments on campus, which together with the Bragg Research Centre, which recognises both father and son, will bring researchers together to create a critical mass in ground-breaking interdisciplinary research and impact.

The name has been approved by Sir William’s family, with great grandson Charles Bragg highlighting his relative’s commitment to industry, and saying: “The Bragg family are sure Sir William would feel very honoured with this new building being named after him by the University of Leeds, given Leeds was where he did the fundamental work leading to the joint Nobel Prize for Physics in 1915.”

Combining fundamental scientific discovery and research-led teaching with applied science and engineering activities to support industry is one of the key aims of largest single-project investment ever to be made on campus.

The University has a breadth of research expertise across the fields of engineering, chemistry, computing, physics and astronomy.

To help strengthen the culture of interdisciplinary working, the new Sir William Henry Bragg Building will link the School of Chemistry’s facilities with the Faculty of Engineering and incorporate a new home for the School of Computing and School of Physics and Astronomy.

Sir William held the Cavendish Chair of Physics at the University from 1909 to 1915 and it was in Leeds where he and Sir William Lawrence developed the X-ray crystallography method.

William Lawrence Bragg, then a junior researcher at Cambridge, first suggested the concept behind the technique in 1912 and Sir William subsequently led the development of the first X-ray spectrometer in laboratories on the University’s campus.

By directing X-rays through matter and recording the resulting diffraction pattern on photographic plates, the pair found they could determine the atomic structure of crystallised materials.

The impact of the X-ray spectrometer and the Braggs’ new method has been felt ever since. For much of the 20th century it was the dominant approach to this form of measurement.

Listen to Lord Bragg, the University’s former Chancellor and a distant relative of Sir William, present a BBC documentary explaining the significance of his work.

The X-ray crystallography technique is used throughout the world. At Leeds, it is employed alongside cryo-electron microscopy and nuclear magnetic resonance at the Astbury Biostructure Laboratory. Other research teams on campus also make extensive use of the method.

In addition to WH Bragg’s contribution to the field of physics, his influence on the School of Computing has been important.

Sir William’s research opened up the study of many varieties of crystals creating highly-complex diffraction patterns. Over the years, this led to the need for computer analysis to interpret the patterns, which ultimately resulted in the field of computing developing as an academic subject in its own right at Leeds. Taking Sir William’s research as its foundation, the School has expanded to cover numerous areas and has just celebrated its 60th anniversary.

Relatives of the Braggs have given the University their support for the name of the Sir William Henry Bragg Building and the Bragg Research Centre, which will house the University’s Royce Institute facilities.

Charles Bragg, a chemist and former head of UK Research and Development at Procter and Gamble, said Sir William “had a passion for advancing the cause of the University and its work with industry and the broader community which this building will continue to take forward."

He said: “His research was in physics, but X-ray crystallography has proved equally important for chemistry, biology and materials sciences, and so fits well with the building's broad inter-disciplinary intent."

He added: “Sir William always took a keen interest in more junior researchers, working with his son as an undergraduate and graduate at Cambridge, and attracting young talented researchers and equipment specialists to Leeds; this co-operation will be an important part of the ethos of the new building and the Bragg Research Centre."

Professor Lisa Roberts, Deputy Vice-Chancellor: Research and Innovation, said: “Naming our new building after Sir William Henry Bragg is in recognition of his tremendous achievements and our great admiration and respect for him in Leeds.

“The Braggs’ legacy is felt in all of our lives. The medical ultrasound device that produces pictures of your baby, the fuel injectors in cars, the SONAR used in submarines, to take just a few examples, all rely on materials developed using X-ray crystallography.

“Adopting the Bragg name will also set a marker for the standard of research and global impact we expect to produce. It is increasingly important that our fundamental scientific breakthroughs are translated into real world usage.”

Journalists requiring further details or interviews should contact Peter Le Riche in the University of Leeds press office on 0113 343 2049 or email p.leriche@leeds.ac.uk