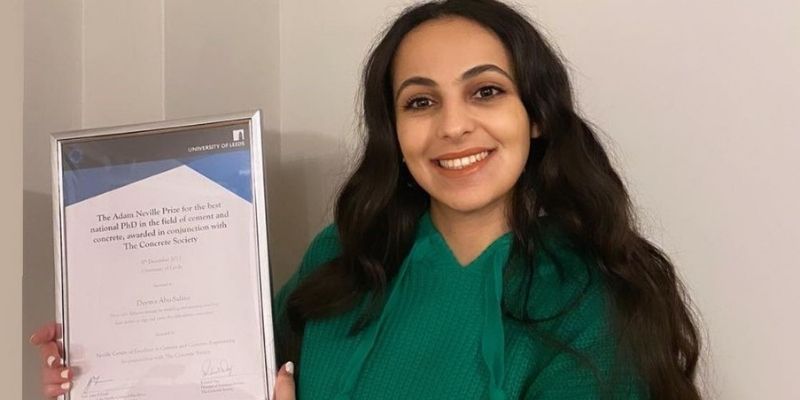 The Adam Neville Prize 2021 has been awarded for best PhD in the field of cement and concrete.

The Neville Centre of Excellence in Cement and Concrete Engineering at the University of Leeds, with The Concrete Society, have awarded The Adam Neville Prize for the best national PhD in the field of cement and concrete.

Led by the University and awarded annually since 2018, the PhD award, a £2,000 cash prize, has been donated by the Neville family, to honour the late Professor Adam Neville, former President of The Concrete Society (1974-1975) and the University of Leeds’ Head of the Department of Civil Engineering (1968 – 1978).

Four shortlisted PhD candidates from universities across the UK were invited to present their work. Candidates were judged on:

Deema Abu-Salma, a PhD student from Imperial College London, was awarded this year’s prize, for her talk entitled “Efficient Strategy for Modelling and Assessing Punching Shear Failure at edge and corner flat slab-column connections”.  The prize announcement was made by Professor Adam Neville’s son, Andrew Neville. We were also joined at the symposium by Dr Mary Neville, wife of the late Professor Neville.

As in previous years, the competition presentations were delivered in parallel with the annual Neville Centre of Excellence in Cement and Concrete Engineering Symposium. This year, the theme for the Symposium was “Achieving a Low Carbon Infrastructure”. The three invited speakers from around the UK were;

Over 100 people from around the world took part in a packed on-line programme of seminars and online discussion. The dual event further successfully reinforced the aim of the Neville Centre, led by Professor John Forth, which is to become the first point of contact for both industry and academia to drive innovation and research-led education in cement and concrete.

We would like to extend our gratitude to the Neville family for their continuing support for the Adam Neville PhD Prize, which we know has had a hugely positive impact for the first three recipients.