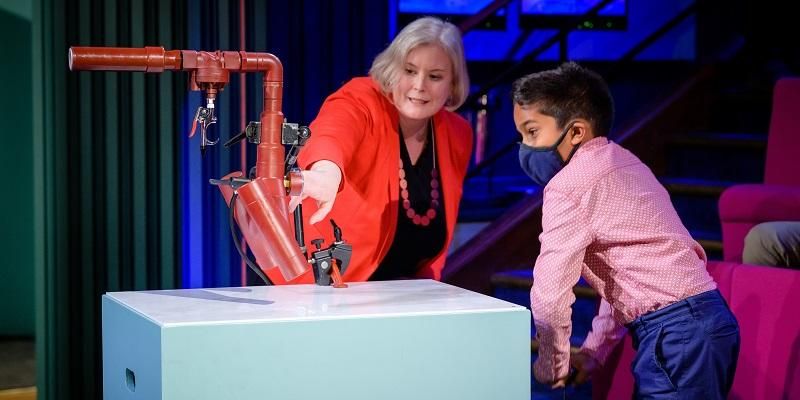 Following in a long line of eminent scientists and engineers, Professor Cath Noakes will stand in the Royal Institution’s iconic auditorium and explain the big ideas reshaping society.

She is one of the guest lecturers in the Royal Institution’s Christmas Lectures, which this year are looking at how the COVID-19 pandemic has changed science.

Some of the UK’s most eminent scientists have been involved in the Christmas Lectures since their inception in 1825, including Michael Faraday, Sir David Attenborough and the Nobel prize winners Sir William Henry and Lawrence Bragg. William Henry was Cavendish Professor of Physics at Leeds in the early 1900s.

The Christmas Lectures are tailored for a younger audience to inspire them about science and technology.

The format will see Professor Jonathan Van-Tam, England’s Deputy Chief Medical Officer, deliver three lecturers about the way science responded to the pandemic, and how the major research effort it sparked will transform society.

For each of the lectures, Professor Van-Tam will be joined by two guest lecturers, each of whom has played a key role in the UK’s response to the pandemic and will lead an on-screen exploration into their area of scientific expertise.

They will be shown between Christmas and New Year on BBC Four and BBC iPlayer.

The lecture featuring Professor Noakes is titled the Perfect Storm and will be screened on Wednesday, 29 December at 8pm on BBC Four. The other expert for that lecture is Julia Gog, Professor of Mathematical Biology at the University of Cambridge.

They will look at what is it that drives a virus to try and dominate the world, the mathematical modelling of contagion - and the dynamics of what goes on behind our facemasks.

Professor Noakes said: “The COVID-19 pandemic has been the biggest challenge to ever face humanity. But in just a matter of months science was able to ramp up a giant research effort which has resulted in new medicines and vaccines.

“But the impact has been much, much wider. I am an engineer and the work that I have been involved with has resulted in more effective modelling of the way viruses spread and the way engineering can be used to keep the air inside buildings clean.

“That not only reduces the risk of COVID transmission, it could also cut other respiratory infections and conditions such as asthma.”

Lucinda Hunt, Director of the Royal Institution, said: “We are delighted that Jonathan will be joined by such an exciting and expert group of scientists during this year’s series of three Christmas Lectures.

“They will work together to take us on a journey through the world of viruses – how they arise, how they proliferate, and how science and society responds – just as they are doing in tackling the current pandemic.

“What a strong and positive message that will be for our young audience, about the power of collaborative science.”

During the pandemic, Professor Noakes and her research collaborators have developed a better understanding of the way the virus responsible for COVID-19 can moved around enclosed spaces and the importance of ventilation in reducing the risk of inhaling small particles containing the virus.

The Royal Institution’s vision is for a world where everyone is inspired to think more deeply about science and its place in our lives.

The Christmas lectures will be broadcast at 8pm on BBC Four on: Tuesday 28 December, Wednesday 29 December and Thursday 30 December. Professor Noakes’ lecture is on the Wednesday. The lectures will also be available on BBC iPlayer.

For more details, please contact the press office at the University of Leeds pressoffice@leeds.ac.uk