Light Night Leeds 2021 marks the start of a season of events to honour the work and achievements of physicist Sir William Henry Bragg.

As Cavendish Professor of Physics at the University in the early 20th Century, he was involved in research that led to a new branch of science called X-ray crystallography, which has been used in many scientific advances including identifying the way DNA is structured.

Bragg collaborated on the research with his son Lawrence, who was a student and then a lecturer at the University of Cambridge. Together they developed techniques that enabled scientists to determine the atomic structure of crystalline materials.

The work was so important that in 1915 the Braggs were jointly awarded the Nobel Prize for Physics.

The father and son team embodied everything that is good about science. They were curious and creative...

As part of Light Night Leeds 2021, which runs across tomorrow and Friday night, an animation made by Dutch Artist Melvin Moti is being projected onto the side of the Bragg Building, a new teaching and research facility for the Faculty of Engineering and Physical Sciences, named after Sir William Henry Bragg. 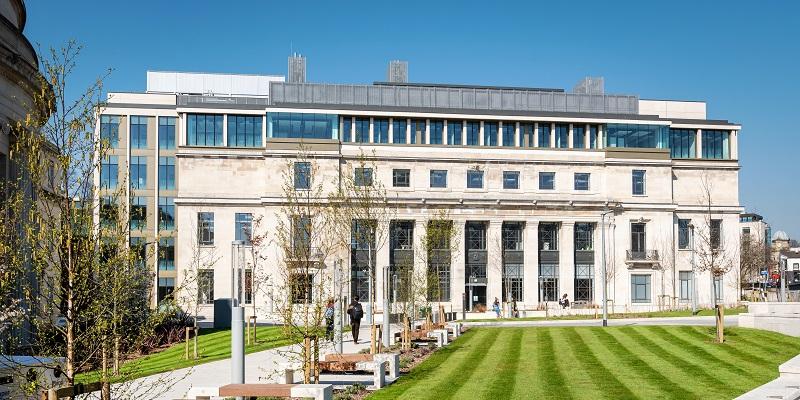 Titled the Eightfold Dot, the projection shows a turning and transforming crystalline form, and the work has been described as “meditative”.

The artist says the film is about the fourth dimension, a mathematical concept that lies beyond the three-dimensional world we are all familiar with. It was made in 2013 and was influenced by the work of the Braggs.

Mr Moti said: “The narrative of the film is made of numbers, it’s a mathematical script. The viewer is invited to simple watch the story unfold. I never have a message in my work, it’s up to the viewer to make their own narratives in their minds.”

The Light Night Leeds 2021 projection is the start of the Inspired by Bragg season which will run over the next eight months to celebrate the achievements of the two scientists.

Sir William Henry Bragg was Cavendish Professor from 1909 to 1915. He and his son Lawrence worked on the use of X-rays to determine the arrangement of atoms within crystals. By then, it had already been discovered that a beam of X-rays would bend or scatter if it passed through a crystal.

Lawrence proposed an equation known as Bragg’s Law to explain the scattering. The equation enabled them to deduce how the atoms were arranged within the crystal.

In a workshop at the University of Leeds, they developed and built a scientific instrument called an X-ray spectrometer which was used to measure the way the X-rays scattered. They were able to work out the structures of a range of minerals including rock salt, sodium chloride, and diamond.

Since those early days of X-ray crystallography, the technique has been used to reveal the structure of the molecules fundamental to life, such as DNA, and has been used in modern medicine to develop new therapies and vaccines.

Legacy of the Braggs’ research

On 26 October, an exhibition opens at The Stanley and Audrey Burton Galley at the University which will not only give an insight into their research but the way the work of the Braggs has influenced more recent scientific advances at Leeds and beyond.

On display will be the notebooks where the Braggs recorded their experimental findings and made their calculations along with the Nobel Prize Medal they were awarded, kindly on loan from the family.

The exhibition also has the original X-ray spectrometer made at Leeds which is on loan from the Royal Institution.

Dr Stella Butler, curator of the exhibition, said: “William Henry Bragg and his son Lawrence formed a fantastic scientific partnership. The father brought amazing experimental skill, the son theoretical genius. Together they provided the springboard for scientific discoveries that would eventually reveal the secrets of nature.” 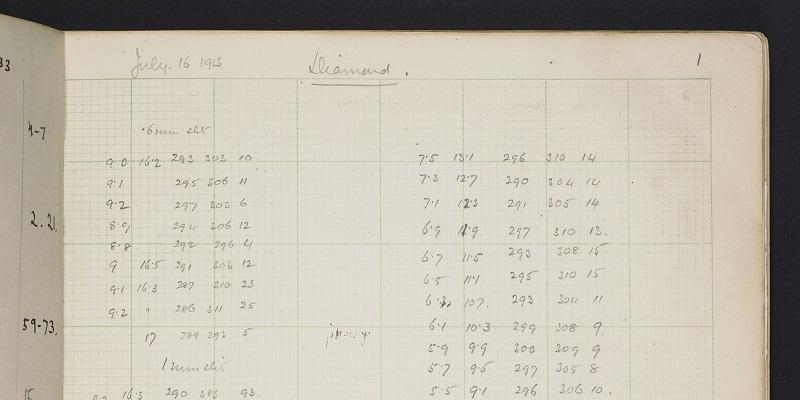 Extract from one of the notebooks used by the Braggs to record the results of their experiments. Credit: University of Leeds Special Collections

The exhibition – Shaping the course of modern science: William Henry Bragg and his legacy at the University of Leeds – opens on Tuesday 26 October 2021 at the Stanley & Audrey Burton Gallery and runs until 5 March 2022.  Entry is free.

An accompanying permanent exhibition will be housed in the new Bragg Building. For more details and opening times, visit library.leeds.ac.uk/galleries.

Other events planned as part of the Inspired by Bragg season include:

The events culminate with the formal opening of the Sir William Henry Bragg building next June. The building has brought together the School of Physics and Astronomy and the School of Computing along with advanced research facilities and a creative learning environment in a building designed for 21st Century science. The formal opening event will feature the Black Dyke Band.

Professor Nora de Leeuw, Executive Dean of the Faculty of Engineering and Physical Sciences, said: “The Inspired by Bragg season celebrates the considerable impact the research conducted by the Braggs has had on science.

“The father and son team embodied everything that is good about science. They were curious, creative and prepared to think beyond traditional subject boundaries.

“The building that takes the name of Sir William Henry Bragg will continue to foster that philosophy. It houses some of the most advanced research facilities in the country, particularly in materials research – and it will also be a beacon for interdisciplinary research, bringing together scientists and sometimes artists in the quest for new understanding and insight.

“It is also a creative space where students can learn and collaborate and play their part in identifying the ways science can help solve the big challenges facing the world.”

Faculty of Engineering and Physical Sciences - Thursday 12 May 2022