A new tool for communicating cost-effectiveness of flood-mitigation schemes

A team of Leeds mathematicians and French civil engineers has developed a new way of visualising and analysing complex flood-protection schemes.

They have steered away from equations and scientific jargon and have instead devised a graphical display that shows, as a hypothetical lake 2-metres deep, the amount of water that needs to be contained in a river valley to stop the river flooding. The graphic is overlaid with the various options necessary to hold back or to capture the flood waters, and how much each option will cost.

The researchers say it will help the public and policymakers grasp the headline options and trade-offs inherent in flood schemes, and their tool already led to better decision making in and regarding floods in France and Italy, particularly where a number of alternatives are being considered.

Professor Bokhove said: “This work started from a challenge thrown down by a representative of the Environment Agency in the UK who said mathematicians always produce equations and he wanted something that was more accessible, a way of communicating complex ideas clearly and simply, to allow the science underlying flood mitigation to be understandable to the people involved in policy making.” 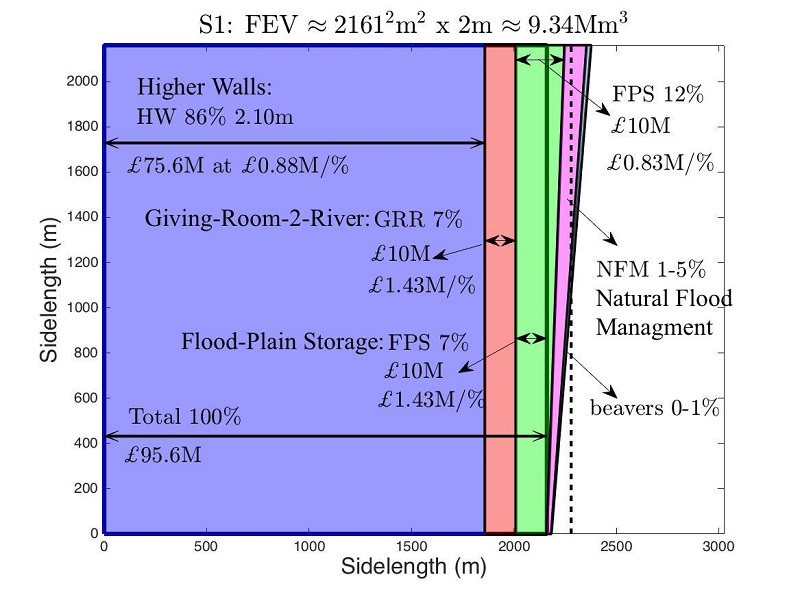 The scientists revisited a concept at the heart of flood analysis: known as flood-excess volume (FEV), it is the amount of water in a river system that cannot be contained by existing flood defences. Expressed alternatively, FEV is the amount of water that floods, expressed as so many millions of cubic metres of water. However, for most people, including Professor Bokhove, that is an effectively meaningless measure that people cannot visualise. They have described their approach in a paper, A cost-effectiveness protocol for flood-mitigation plans based on Leeds’ Boxing Day 2015 floods, published in the journal Water and intended for a more general audience.

To illustrate the idea, they used data from the floods on Boxing Day 2015, when the River Aire burst its banks in Leeds, which caused extensive damage to homes and businesses estimated at around half a billion pounds.  Around 9.34 million cubic metres of water flooded from the River Aire on Boxing Day. Professor Bokhove notes that this volume of flood water translates into a hypothetical square lake of depth 2 metres and with sides 2.16 km in length. In comparison, the upper River Aire is about 50 miles long, with a valley width that varies roughly between 200 and 600 metres along its path.

He said: “To have prevented the flood, you would have to somewhere deal with that volume of water. It is not inconceivable that, along the course of the river that additional water could be accommodated, either by increasing the size of flood plains, or by removing obstructions in the river, widening the river channel in places or by building higher flood walls: or, more likely, by combining some or all of those measures. Seeing flood mitigation this new way makes it easier for people to understand not only the interventions that are possible and the impact they are likely to have but also the costs associated with each such measure."

The researchers then used their novel graphical approach to analyse and to communicate a hypothetical scheme for increasing the flood defences in the centre of Leeds to cope with not only a major flood that would be expected once in 100 years but also a one-in-200-year flood. They looked at several mitigation scenarios, their costs and their impact on river dynamics, an area of science known as fluid dynamics in which Leeds is a world leader.

The accompanying graphic shows one hypothetical scenario. With colour-coded overlays, it shows how higher flood walls, more flood plains and river widening could provide the additional drainage necessary to stop a repeat of the scale of flooding seen in 2015.  Several such scenarios analysed in the paper reveal the limited impact of natural flood management: i.e. the planting of trees or the introduction of numerous beaver colonies to build dams have very limited impact on mitigating big floods, contrary to to what many people in the UK are led to believe.

Over the six years to 2021, the Government will increase spending on flood schemes in England.

Professor Bokhove said: “Our approach is intended to offer a means of comparing and choosing between flood-mitigation scenarios in a quantifiable and visual manner, thereby offering a better chance of them being understood by a wide audience including the general public, stakeholders and planners.”