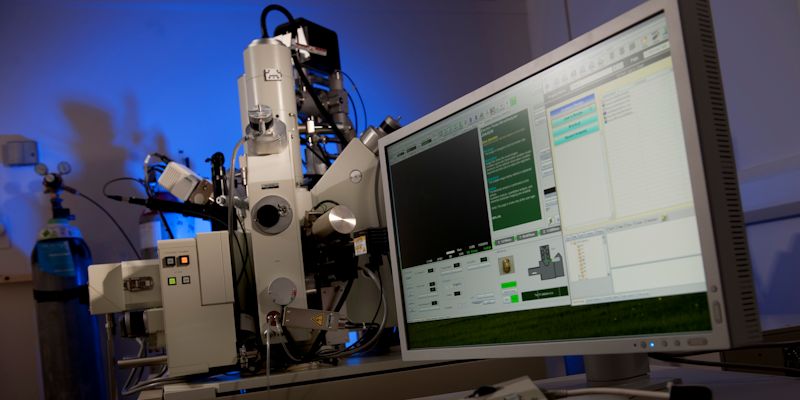 A nanomineral which has the potential to capture Carbon Dioxide from the atmosphere has been discovered by University of Leeds researchers.

The scientists discovered the mineral after studying the process of creating pyrite, which is made during a chemical reaction between ferrous iron and aqueous hydrogen sulphide.

The reaction takes places in various stages, or ‘phases’, and the discovery of this nanomineral came when the research team uncovered a ‘precursor phase’ in the reaction.

The discovery could open new avenues for industry, and give insight into life’s emergence on earth.

The scientists have called the mineral FeSnano, and say it could be used as a green catalyst to remove carbon dioxide from the atmosphere. As a result, it can reduce potentially harmful emissions, making it an important discovery for industry.

Nature Communications has published an article detailing the discovery, which was part of research funded by the Natural Environment Research Council.

Dr Adriana Matamoros Veloza is the study’s lead author and is part of a multi-national group of scientists who have found the existence of FeSnano, which is a ‘precursor’ phase in the reaction which creates the sulphide mackinawite, that was not previously known. 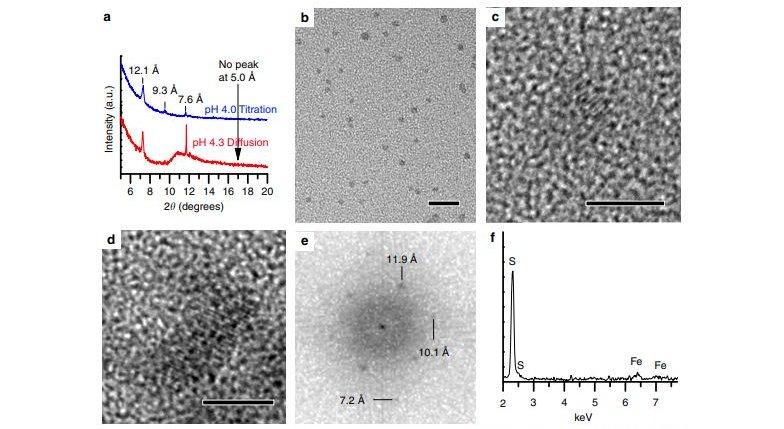 Medium and high resolution image of FeSnano formed at pH 4.5 shown in figure b, c and d (Image courtesy of Nature Communications)

Medium and high resolution image of FeSnano formed at pH 4.5 shown in figure b, c and d (Image courtesy of Nature Communications)

A ‘precursor’ phase occurs on the journey to the formation of a stable mineral material. Several reactions between elements take place on the pathway to the formation of pyrite, including the creation of mackinawhite, which is an iron sulfide material typically found in marine environments.

Up to now, it was believed that mackinawhite is the first solid iron sulfide mineral to form on the pathway to pyrite. For the first time, scientists have discovered this earlier and more reactive phase, FeSnano, giving further insight into how pyrite is formed.

The realisation of its existence opens new venues for applications that are useful to industry, as it can be used as a catalyst to react with CO2 to turn it into a stable material. This is important to industry because, if isolated, it could be used sustainably to aid the production of products like solar panels.

Dr Matamoros-Veloza said: “Discovering FeSnano has the potential to be incredibly useful to industry, as Fe-S phases are desirable for the sustainable catalytic conversion of carbon dioxide. Being able to produce and stabilise FeSnano can be useful in the production of energy-efficient products such as solar panels.

“This is an important piece of work to demonstrate that the formation of sulfide minerals follows unpredictable pathways to reach the most stable structure as seen in many other oxide systems.”

Scientists will also be able to better understand the behaviour of iron and sulphur in Earth’s ancient and modern environments as a result of the discovery.

This knowledge can give insight into the way early life may have formed: FeSnano nanostructures could have played a catalytic role in the formation of prebiotic molecules in ancient times.

Dr Veloza added: “Iron sulfides have been present on the Earth since its origins and we now know how they started to form at acidic, sulfidic and anoxic environments. This means we are one step closer to showing how the highly reactive formation of early life might have developed.”

Iron sulfides have been present on the Earth since its origins and we now know how they started to form at acidic, sulfidic and anoxic environments... we are one step closer to showing how the highly reactive formation of early life might have developed.

The group of engineers carried out this research in strictly oxygen-free conditions to mimic the environmental conditions of the sea, where early life would have formed, and to prevent the material from reacting in uncontrolled ways that may happen as a result of changing factors.

The Bragg Centre for Materials Research is supported by our £96million investment in engineering and physical sciences, the Sir William Henry Bragg building.

Research was also carried out at the Cohen Group’s Mineral Synthesis Laboratory using the anaerobic chamber, a heavy-duty piece of equipment with airlock access that is designed to minimise oxygen ingress.

Research was conducted using instruments in the Leeds Electron Microscopy and Spectroscopy Centre (Lemas, main picture), at the University, which is part of the Bragg Centre for Materials Research.

For more information about Nature Communications, visit their website.