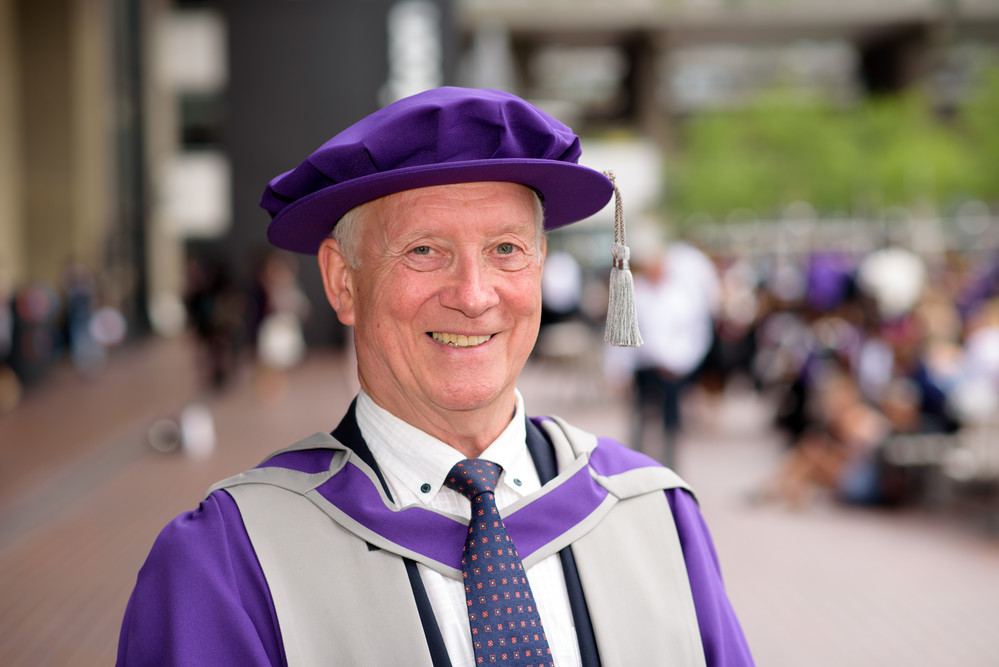 Terry Wilkins, Emeritus Professor of Nanomanufacturing Innovation at the University of Leeds, has been awarded a Doctorate of Technology honoris causa by London Metropolitan University.

Professor Wilkins is a serial innovator of novel, game-changing technologies that have had a significant impact on the healthcare and advanced materials industries. His innovative high-speed measurement systems have created enormous financial and social benefits and have influenced industry widely. Applications of these systems have included the diagnosis of metabolic diseases and cancer, and eliminating the need for radioactive licenses for clinical laboratories worldwide.

Since being appointed as Europe’s first professor of nanotechnology manufacturing in 2005, his work has led to the development of novel translational nanotechnology research at the University of Leeds.

He has achieved stunning success in advanced materials and environmental engineering throughout his career. His research has led to a 99% reduction in chemical pollution in the River Tees in just 18 months.

He has made a substantial personal contribution to the creation of the world’s first DNA fingerprinting business, Cellmark, which has helped transform policing, paternity resolution and immigration.

He led a team at that developed a novel measurement and control system essential for the success of Hydrofluorocarbons (HFCs) as a replacement for Chlorofluorocarbons (CFCs).

Until the late 1980s, CFCs were to be found in air conditioners and refrigerators all over the world, but were banned after The Montreal Protocol on Substances that Deplete the Ozone Layer prohibited their use. By enabling the use of HFCs, Professor Wilkins and his team have helped significantly reduce damage to ozone layer over the last 30 years.

Success as a serial innovator has led to service as a high-level expert advisor to the UK government, including the former Minister of Science & Universities, David Willets; the European Commission, and EU parliament, covering the nanotechnology, advanced materials, biotechnology and production technologies and the Marie Skladowska Curie mobility programs respectively.

He has won 10 awards including two prestigious Prince of Wales Prizes for Innovation and Production.

In 2017, Professor Wilkins was elected to the Fellowship of the Royal Academy of Engineering in recognition of his substantial achievements and the continuing influence that he exercises over the many areas in which he is involved.

Our new Fellows represent the very best of UK engineering. From technology giants to our universities’ finest minds our new Fellows demonstrate how engineering is tackling some of the biggest challenges facing the world.