Abimbola Oladokun, School of Mechanical Engineering, was commended at the 2017 Mission of Tribology Research seminar – an annual event focused on a rising generation of researchers.

Abimbola was awarded for his resaearch presentation, entitled ‘Subsurface transformation of Ti6Al4V alloy under fretting conditions’ at the Mission of Tribology Research seminar, which was the 26th in the series organised by the Institution of Mechanical Engineers (IMechE). The research was jointly supervised by Dr Michael Bryant, Professor Richard Hall, and Professor Anne Neville.

The award was presented by Fellow Martin Cox, Chartered Engineer and President of IOM3. Mission of Tribology Research is an annual conference that celebrates the contributions of researchers in tribology across the UK. 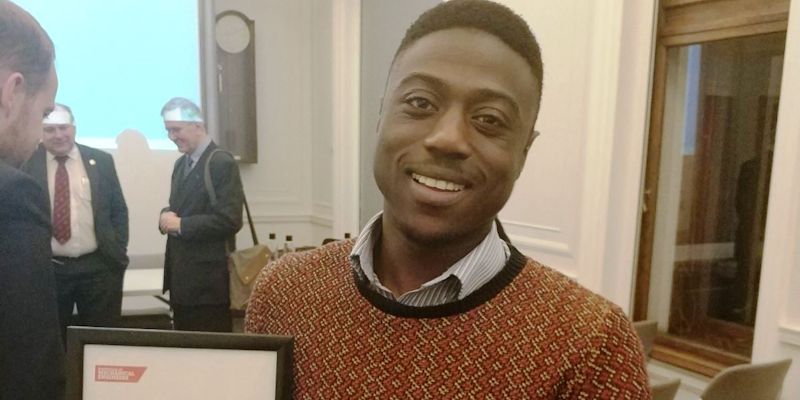 Abimbola Oladokun at the IMechE Mission of Tribology Research seminar 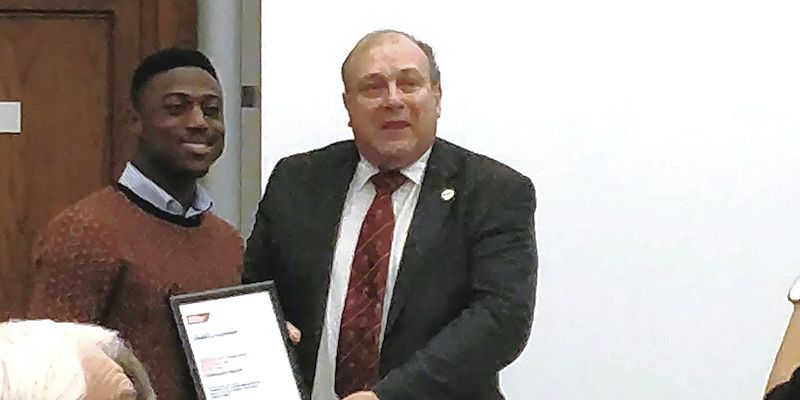 About ‘Subsurface transformation of Ti6Al4V alloy under fretting conditions’

Modular necks in Total Hip Replacement (THR) are often made of titanium alloys. The most common of these alloys is Ti6Al4V and there have been several reports in clinical literature of in-vivo fracture of these components. Previous research have highlighted the contribution of fretting wear and fretting corrosion toward the failure of these component.

However, the research presented at the 26th Mission of Tribology Research described a shear-induced subsurface recrystallization Ti6Al4V alloy as fretting displacements of the lubricated contact is varied incrementally. The study showed an incremental transformation of the alloy from an initially crystalline state; to preferential re-orientation of the crystals; then to a nano-crystalline state; followed by the formation of amorphous Ti6Al4V structures and ultimately resulting in sub-surface fracture of the alloy.

About Mission of Trobology Research

Aimed at UK research groups concerned with improving the understanding of friction, wear and lubrication processes, the Mission of Trobology Research seminar enables researchers to meet for a series of presentations and discussions on current aims and progress. The seminar is an opportunity for researchers to showcase their work to industry.

For further information about Abimbola Oladokun’s research, view his profile.

View the profiles of Dr Michael Bryant, Professor Richard Hall, and Professor Anne Neville to learn more about their research interests and supervision.

For more details about the annual seminar organised by Institute for Mechanical Engineers, view the IMechE website.