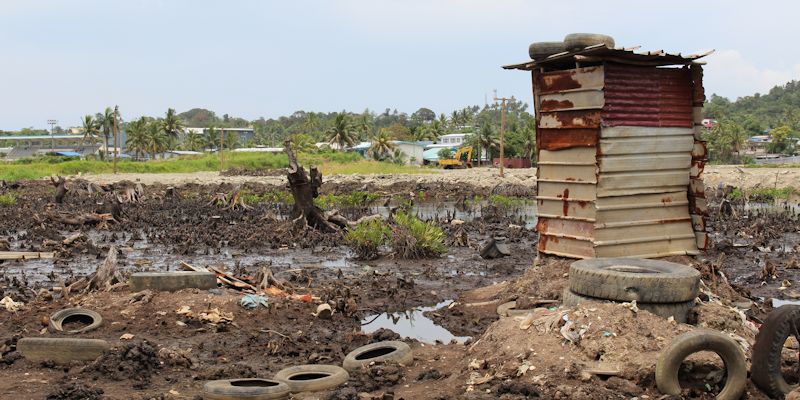 Dr Dani Barrington, Lecturer in Water, Sanitation and Health in the School of Civil Engineering, has co-authored an article published in The Conversation about the need to invest in safe sanitation.

About 4.5 billion people – more than half of us on our crowded planet – do not have safe sanitation. By this we mean a toilet, at home, one which separates us from our excreta, after which the excreta are treated or buried and do not contaminate the environment. One of the United Nations’ recently-adopted Sustainable Development Goals is for everyone to have safe sanitation by 2030, which is expected to improve physical and psychosocial well-being worldwide. But how do we achieve this? The answer is not as simple as building more toilets.

For people to invest in sanitation, they need to access the kinds of toilets and services that they want to use. One of the benefits of safe sanitation – and one that motivates many to invest in it – is better physical well-being. But messages about preventing disease are often insufficient to change behaviours.

One approach that combines behavioural change with improved access to sanitation products and services is sanitation marketing programmes, defined as: The application of the best social and commercial marketing practices to change behaviour and to scale up the demand and supply for improved sanitation, particularly among the poor.

Toolkits and guides to develop and implement sanitation marketing have been published recently, as have region- and country-specific manuals produced by NGOs and government agencies. There is a growing community working in this area, evidenced by reports and discussions of projects across the globe.

In most such programmes, an external support agency conducts market research and then assists local entrepreneurs in developing a market in which to sell products and services. These might be toilet slabs and superstructures, pay-per-use toilets or pit emptying for latrine owners. The programmes normally include advertising campaigns to encourage uptake of safe sanitation.

This may seem like a sensible approach, but we and our colleagues suspected that some of these programmes use practices that adversely affect some people. In a new paper, we review 33 sanitation marketing programmes to understand what practices are used and the outcomes reported. Four of the 33 programmes reviewed reported the following adverse effects:

Use of status and shame

Conspicuous consumption occurs when improving status is emphasised in promoting products and services. In this case, that means attempting to convince potential buyers that investing in sanitation will enhance their standing compared to those around them. This is achieved, for example, through promoting toilets as a status symbol, and invoking peer pressure to increase sales. The idea of “Keeping up with the Joneses”, a worldwide phenomenon whereby people purchase goods and services so as to socially and financially keep up with, or outdo, their neighbours, is very much at work here.

Some sanitation marketing programmes set out to make people feel disgusted by their sanitation behaviour to encourage them to invest in the product or service on offer. One example in Indonesia portrayed a character who defecates in the open, Lik Telek (“Uncle Shit”), as a threat to his community. One of the programme’s posters portrayed Lik Telek being driven out of his village for not investing in sanitation, reading: 'My village is clean and healthy. No stench, no flies, and no more Lik Telek. The whole village is more dignified.'

Although many of the programmes we looked at which employed such tactics evaluated their impact in terms of whether toilets were purchased or used, few evaluated their impacts on well-being. But personal dignity is a human right that can be or is eroded by these practices. Reduced dignity is associated with poor physical and psychosocial well-being in the form of depression, social anxiety and alienation.

Safe sanitation protects and improves physical well-being for those who acquire and use it, and for those around them. One person using a toilet reduces the amount of excreta entering the environment, with benefits community-wide for those who use toilets and those who do not. It has been argued that temporary loss of dignity leading to the adoption of behaviours that are beneficial to both the individual and community is tolerable.

This argument is only sound so long as the remedy – safe sanitation – is universally achievable. But there are often disadvantaged people who are unable to invest in safe sanitation (for financial reasons, perhaps, or because they are physically unable to contribute to construction). Many sanitation marketing programmes do not provide subsidies or other pro-poor strategies which may assist because such practices are considered to “distort the market”. Individuals who do not acquire safe sanitation are particularly susceptible to reduced well-being, and they will be unable to remedy this.

During the design and implementation phases of sanitation marketing programmes, external support agencies need to understand sanitation marketing’s potential to reduce well-being. If practices that erode dignity are used, then such agencies must consider how the programme will eventually restore it.