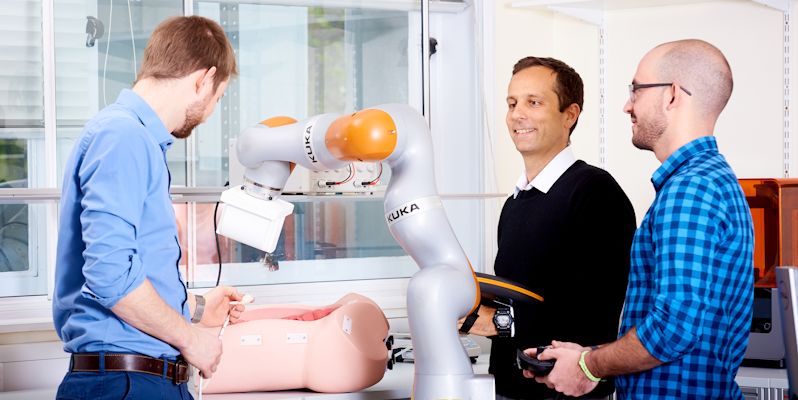 Professor Pietro Valdastri and his graduate student Piotr Slawinski from Vanderbilt University presented their research in autonomous retroflexion in robotic colonoscopy at the ICRA 2017 conference.

The project was carried out in collaboration with an interdisciplinary research team from Vanderbilt University led by Dr. Keith Obstein.

Professor Valdastri, Chair of Robotics and Autonomous Systems at the University of Leeds, and his graduate student Piotr Slawinski, Vanderbilt University, presented at the 2017 Institute of Electrical and Electronics Engineers (IEEE) International Conference on Robotics and Automation (ICRA) in Singapore.

The procedure is designed to eliminate sedation from colonoscopy. This will benefit patients with cardiovascular diseases, who cannot get sedated, and patients with inflammatory bowel disease, who need to undergo colonoscopy more frequently than their healthy counterparts. Ultimately, it will lead to more people undergoing the life-saving screening test.

Moreover, eliminating sedation will also save the costs related to anaesthesia administration and monitoring during colonoscopy.

This study was also presented at Digestive Disease Week (DDW) 2017, for which Professor Valdastri and collaborators also submitted an abstract.

About Autonomous retroflexion of a magnetic flexible endoscope

The capsule robot, which is inserted rectally, could be used safely and effectively in the future on humans to identify and remove pre-cancerous lesions and tumours detected during colonoscopy.

New research shows that an 18-mm magnetized capsule colonoscope, which can be paired with standard medical instruments, successfully performed intricate maneuvers inside the colon while guided by an external magnet attached to a robotic arm. These magnets also replace cables used in the existing procedure to steer the tip of the instrument.

The process of retroflexion allows the robot to look in multiple directions, encompassing and capturing a wider view, thus potentially increasing the amount of lesion detected during the endoscopic procedure. This is not possible using a traditional flexible endoscope, as it may not be controlled further up the body. 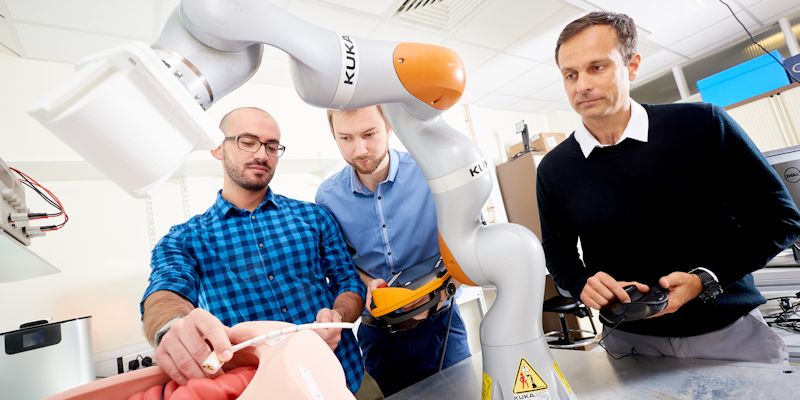 Pietro Valdastri and researchers using the capsule robotics equipment in the STORM lab, University of Leeds

The capsule’s body is incredibly thin in diameter, meaning it has the same capabilities as the existing instruments but offers greater flexibility and minimising the pain perceived by the patient during colonoscopy. It is also possible to track its position in real-time, which is unique to this autonomous platform.

Use of real-time localisation within this platform, informed by an algorithm, assists the doctor operating the equipment. This provides insight that otherwise would not be possible from the human capacity to understand the procedure alone. The feedback provided by this intelligent algorithm allows the doctor to operate a joystick which guides the position of the capsule.

They reported that it successfully completed the manoeuvre of retroflexion, in which it bends backward to give the endoscopist a reverse-view of the colon wall, on its own, at the press of a button.

The team found that the autonomously controlled capsule robot and human endoscopist were successful in completing 30 retroflexions in a porcine in vivo animal model. The capsule robot completed retroflexion in an average of 12 seconds, which was within the researchers’ expectations.

Following the success of these tests in a pig, it was indicated the team will be pursuing human trials, which are expected to begin in 2019.

In the meantime, the team will continue to optimise the algorithms that control the robotic arm to improve their performance in maneuvering the capsule-based robotic system.

DDW is the largest international gathering of physicians, researchers and academics in the fields of gastroenterology, hepatology, endoscopy and gastrointestinal surgery. For more details about, Digestive Disease Week (DDW), visit the DDW 2017 website.

For more details about Institute of Electrical and Electronics Engineers (IEEE) visit their website.

View Autonomous retroflexion of a magnetic flexible endoscope, published by the IEEE.