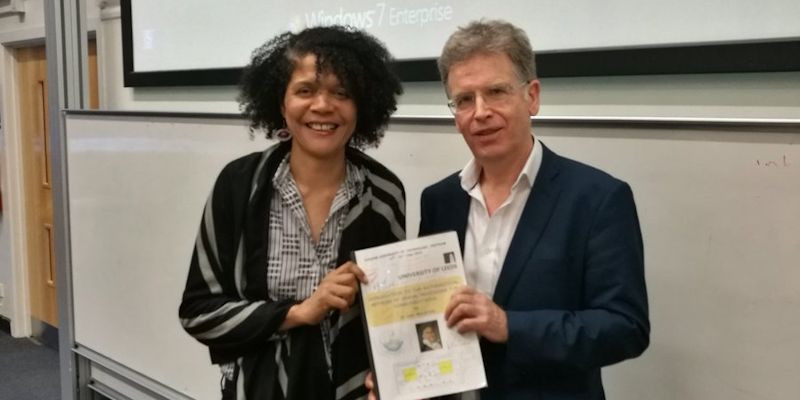 Chi Onwurah MP, Shadow Minister for Industrial Strategy, Science and Innovation, visited the University of Leeds to discuss the importance of engineers and scientists in parliament and public life.

Chi Onwurah’s talk, entitled ‘Why are there so few engineers in parliament and public life - and does it really matter?’, included a discussion surrounding a number of questions, just some of which are:

During her visit, Chi also gave important career advice to students from the Faculty of Engineering at the University of Leeds.

The event began with a short introduction from Dr Des McLernon, followed by a 20-minute talk, and then a Q&A session.

In response to Chi saying that signal processing was her favourite subject at Imperial College, Des McLernon presented Chi with a copy of his postgraduate notes on advanced statistical signal processing (900 pages).

Pictured above: Dr Des McLernon from the School of Electronic and Electrical Engineering presenting Chi Onwura MP with a copy of his notes on statistical signal processing. 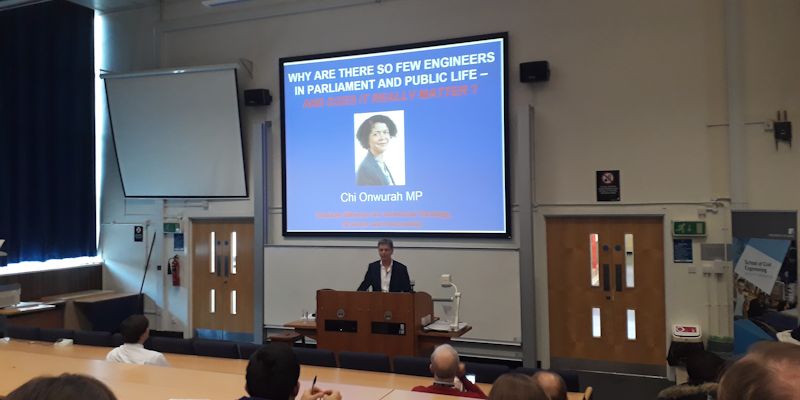 The event was a well-attended meeting, with an excellent discussion and a unanimous feeling that attracting more men and women with STEM backgrounds into the Commons was urgent.

In addition to explaining that engineers are generally more trusted than bankers, journalists, and lawyers, Chi also said that that this was an important part of her appointment as Labour candidate for her parliamentary seat.

Finally, Chi strongly encouraged more female students to study STEM subjects at school and then apply for engineering courses at university. She also emphasised the positive, welcoming, and supportive environment for female engineering students that currently exists at UK universities.

Chi Onwurah MP is a Chartered Engineer with a BEng in Electrical Engineering from Imperial College London and an MBA from Manchester Business School.

Now while Xi Jinping (President of China) and Juha Sipilä (Prime Minister of Finland) are both engineers, the UK Parliament appears to be dominated by lawyers, journalists, consultants and bankers. Few have any scientific qualifications and Chi is possibly the only chartered engineer out of 650 MPs.

Prior to Chi’s election to Parliament in May 2010 she worked as Head of Telecom's Technology at the UK regulator Ofcom focussing on the implications for competition and regulation of the services and technologies associated with Next Generation Networks.

Before Ofcom, Chi was a Partner in Hammatan Ventures, a US technology consultancy, developing the GSM markets in Nigeria and South Africa. Previously she was Director of Market Development with Teligent, a Global Wireless Local Loop operator and Director of Product Strategy at GTS.

She has also worked for Cable & Wireless and Nortel as Engineer, Project and Product Manager in the UK and France.

To find out more about Chi Onwura MP, visit her website.