Giving robots a change of heart 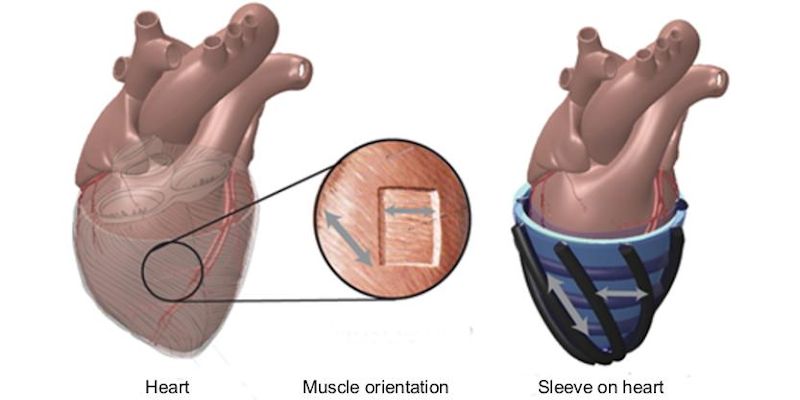 A prototype robotic sleeve, which can wrap around a weak heart before synchronising with its natural motion to help it keep beating, has been developed by an international team of engineers.

Dr Ali Alazmani, a University Academic Fellow from the Faculty of Engineering at Leeds, is central to the team, which includes researchers from Harvard and the Boston Children’s Hospital.

Dr Alazmani said: “We took the inspiration for how the heart itself already operates, to take a new approach to providing support for the muscle rather than trying to circumvent it as current devices do.”

The device uses innovative soft robotics technology; a thin silicone sleeve containing soft pneumatically controlled components slides around the heart and contracts or relaxes, as a healthy heart would itself, so mimicking the outer muscle layers.

The device is attached to an external pump, which uses air to power the sleeve.

The sleeve is an entirely new device and could be tailored to individual patients’ needs. The shape of the sleeve can be moulded to an individual heart and, for example, those with a weakness on the right side of their heart could have more pressure applied in that area to boost its operation. The levels of pressure can also be reduced over time as the heart recovers from a trauma.

Other devices, known as ventricular assist devices (VADs) do exist to support the heart’s function, and are used on people with end stage heart failure who are awaiting transplants.

They successfully extend lives, but because they come into contact with the blood by pumping it directly into the heart muscle, have a high level of risk, including blood clots, infections and other issues.

The new soft robotic sleeve does not come into direct contact with blood, as it wraps around the outside of the heart, avoiding that risk and so could provide an alternative treatment method to existing devices.

It is still in the prototye stage, but Dr Alazmani said a working version of the device has been successfully tested on six pigs which had had a cardiac arrest. The trials, carried out in America, proved it was able to restore the normal blood flow.

There is further research to be carried out in order to make the device suitable for human use, but trials so far have contributed greatly to ensuring it is feasible and deliverable.

Dr Alazmani added: “I’d also like to think we have proved that robotics can have many applications other than those which most people think of, like working on assembly lines.

“By combining good design and simple control, soft robots like this one can be programmed to carry out complex motion by mimicking the actions of tissues in the body. In the past this method has been tested outside the body, but we can see there are now opportunities to create soft robotic devices which could theoretically be implanted inside a person.”

The research has been published today in the journal Science Translational Medicine.

It was supported by the Translational Research Program grant from Boston Children's Hospital, a Director's Challenge Cross-Platform grant from the Wyss Institute for Biologically Inspired Engineering, Harvard School of Engineering and Applied Sciences and Science Foundation Ireland.

Journalists wishing to interview Dr Alazmani should contact Peter Le Riche, in the University of Leeds press office on 0113 343 2049 or email p.leriche@leeds.ac.uk.