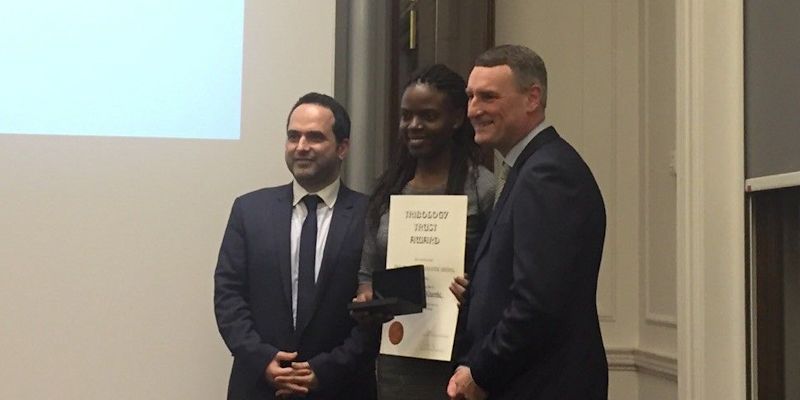 Dr Doris Khaemba, Research Fellow at the University of Leeds, has won the IMechE Tribology Trust Bronze Medal, a prestigious medal awarded to researchers in an early stage of their career.

The Tribology Trust Bronze Award is given in recognition of significant research contributions in the field of tribology made by a young researcher, with only one medal awarded annually. Accomplished young tribologist Dr Doris Khaemba attended the Tribology Trust awards ceremony, which took place in London in December.

With support from her nominator, Professor Ardian Morina, Dr Khaemba applied for the Tribology Trust Bronze Medal in June this year. She submitted a proposal detailing her research in tribology, role at the University of Leeds and future plans, alongside a bibliography of her highly regarded publications and presentations.

The ceremony, which Dr Khaemba attended with her nominator and guest, was held at the Institute of Mechanical Engineers (IMechE) building in London. It began with introductions and photographs at the IMechE President's office together with the winners for various categories, with the awards ceremony to follow. One of the winners delivered a 45-minute lecture nearing the close of the ceremony, which ended with dinner at the institute.

Dr Khaemba has published the results of her studies in both peer-reviewed journals and at international conferences. Her research contributions are recognised widely, having won a number of awards in Africa, Japan, and the United Kingdom, including the 2015 Mission of Tribology Prize.

Following the recent completion of her PhD, Dr Khaemba has continued to work at the University of Leeds where she has begun investigating the mechanism of ‘cold corrosion’, a phenomenon which occurs in large two-stroke marine diesel engines, particularly following a period of ‘slow steaming’.

This work is being conducted in collaboration with the France-based oil company Total, and seeks to develop a better understanding of this process while also identifying new additives to combat corrosion in these systems.

Dr Doris Khaemba, Research Fellow at the University of Leeds

Dr Doris Khaemba graduated from Tokyo University of Agriculture and Technology with a BEng in Chemical Engineering in 2011, and subsequently completed an MSc in Advanced Chemical Engineering with IT at Loughborough University in 2012. She first entered the field of tribology in 2012 when she joined the University of Leeds as a Marie Curie Early Stage Researcher working on the tribochemistry of interfaces in internal combustion engines within a European programme titled ENTICE.

During her role as a Marie Curie Early Stage researcher, Dr Khaemba also enrolled for a PhD in tribology at the University of Leeds. The focus of this PhD research work was to develop a better understanding of the interfacial processes that occur in ferrous contacts operating in the boundary lubrication regime. During tests with MoDTC-containing lubricants the processes of additive decomposition, tribofilm formation and removal were all studied.

Dr Khaemba completed her PhD in 2016, having developed a detailed experimental and analytical protocol for studying the lubricant and surface interactions and their effect on friction and wear of boundary lubricated systems.

As a result of her PhD research, a new decomposition mechanism for the engine oil friction modifier molybdenum dialkyldithiocarbamate (MoDTC) additive was introduced. This is already being applied by industry to optimise the performance of this additive in engine tribological systems.