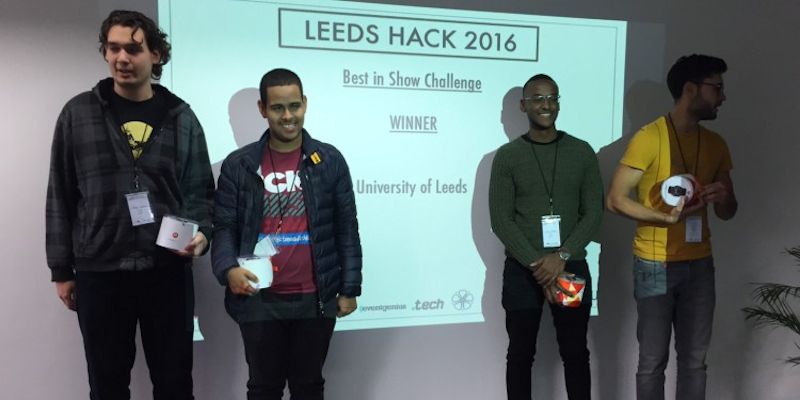 Undergraduate students from the School of Computing at the University of Leeds have won the 'university challenge' category of the 2016 Leeds Hack competition.

Second and third year students, Amir Faris, Jones Agwata, Marcel Ruhf (team leader) and Teodor Todorov, from the University of Leeds beat other university teams from around the UK in a challenge based on exploring the gaia dataset, an astronomical data set provided by the European space agency from their gaia mission. The team also received the "Best in show" prize for their work.

The team spent the first 7 hours of the 24 hour hack learning astronomy – followed by working through the night to code a solution which involved mathematical algorithms to cope with the 3-dimensional nature of the problem. The team converted data from the sattelite to map the Universe from a point on earth and to represent this as a 3 dimensional image. The team also classified objects they found into stars, planets and asteroids dependent on their relative movement patterns.

Their solution to the problem saw them pull together understanding developed in a number of their undergraduate modules including software engineering, project management, Data mining and Machine learning.  Their solution used machine learning techniques to classify celestial bodies as either stars, asteroids or unknown and provided visualisation of this data.

As prizes, they received paid summer internships, moto 360 smartwatches and the kudos of having competed, and won, against professional software developers.

In addition to the prizes they received, the students developed an understanding of teamwork, professional programming standards and astronomy. The judges praised the student's ability to work as a team, ensuring every contribution was valued.

The event was sponsored by Arup, Sky, Ticket Arena, Genius Events and Futurelabs.