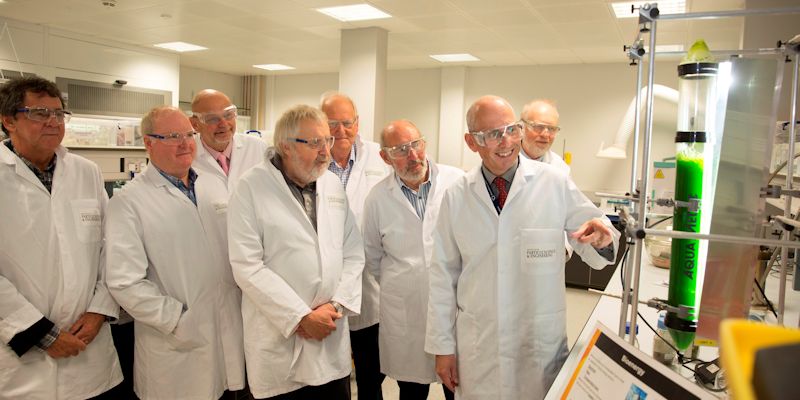 All seven studied in what is now the School of Chemical and Process Engineering in 1966, and with their half century in mind, returned to the campus for a tour of the cutting-edge facilities which current students use.

The group heard from the School’s Deputy Head, Dr Jim Young about the University’s ongoing £38m investment to ensure its Chemical and Process Engineering buildings and equipment are the best available for current and future students and researchers. The spending is part of a £520m investment across the whole University into new facilities.

They also learnt about the type of research now carried out, including the creation of a monitor which diabetics could use to test their blood glucose levels without having to prick their fingers.

The school recruits around 175 undergraduates per year into Chemical Engineering, which the alumni group said was equivalent to the entire undergraduate cohort during their degrees.

Among the group was Dr David Bown who, since graduating, had worked in the nuclear and oil and gas engineering industries, including at BP’s research and development centre.

He said: “It is that investment that is allowing the University to move forward much more. What you have now is a very modern, up-to-date and forward thinking school, not just a teaching department which is what it was 50 years ago.”

Dr Young added: “We always welcome former students back to campus and this visit was a real pleasure. Meeting the people who worked in the same fields as we do half a century earlier and hearing about how much things have changed is inspiring.”