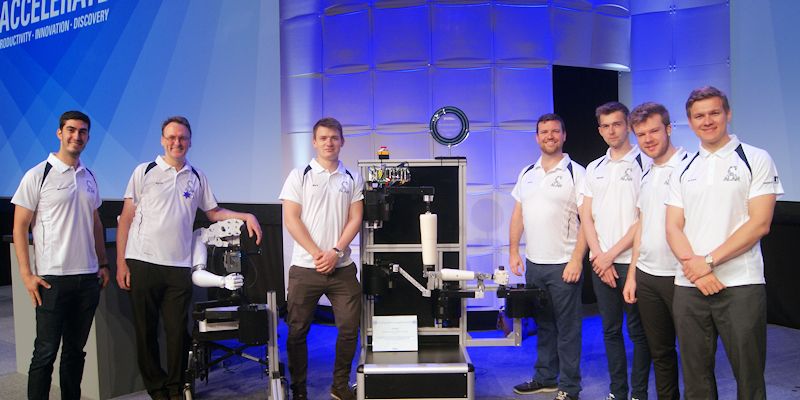 A multidisciplinary team of students from the Faculty of Engineering have won the National Instruments Global Student Design Contest with their post-stroke patient therapy device Project ALAN.

The Project ALAN team beat university projects from around the world to win the competition, including an underwater robot for arctic research by Aarhus University, and the control and test of an eco-car by DTU University, which set a world record for the highest ever fuel efficiency.

The Advanced upper-Limb Autonomous Neuro-rehabilitation (ALAN) device offers the concept of robotics-enabled remote physiotherapy, a way for stroke patients to practice physical therapy without the presence of a therapist, allowing patients to practice more and to recover faster.

Not only has the team created a commercially-viable rehabilitation device – they’ve also developed a testing system using a humanoid arm to replicate the movement of a patient. These systems will work together by working remotely, connecting through the internet to allow therapists to assess and monitor patients out of the office.

The team presented their work on stage at a keynote presentation during NI week 2016.

Team member Arturs Grigals said: "Winning the National Instruments Global Student Design Competition has been a fantastic experience. It was one of the strongest competition years we've seen. Other teams have made great projects that will change peoples lives. We at team ALAN have put a lot of work into our project for the past year and we could have not done this without the help of our supervisors and many others."

The team consists of:

The project has also been presented to the Houses of Parliament, been on show at UK Robotics week and the IET International Robotics Showcase.

This is the second year in a row and the fourth time in five years that a University of Leeds project has reached the global finals of the competition, with undergraduate project Medsim being runner up in 2015.

Project ALAN has been supported by donations to the Footsteps Fund by alumni and friends of the University of Leeds.

To find out more about Project ALAN, visit their project submission webpage.