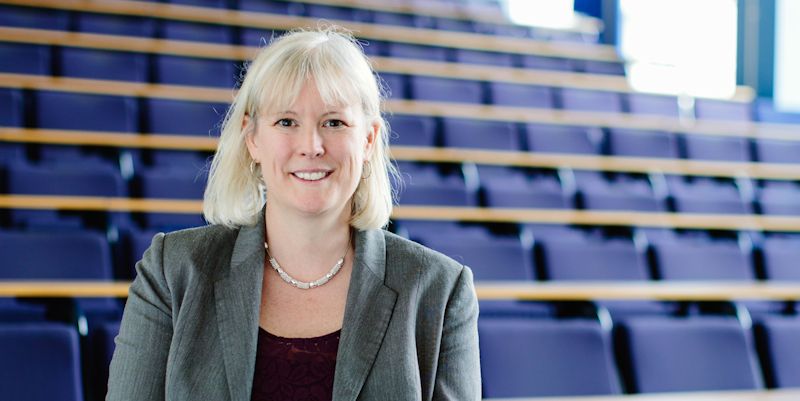 To mark International Women's Day on Tuesday 8 March 2016, the University has awarded 16 members of staff or students the title 'Woman of Achievement 2016', including Professor Cath Noakes.

The Women of Achievement awards recognise the significant contribution and impact that women – both staff and students - have made across the University and beyond.

The awards are part of the University’s commitment to further promote gender equality and support the career development of talented women in all areas of the organisation.

This year's Women of Achievement are:

Professor Cath Noakes, School of Civil Engineering: recognised for her on-going leadership and commitment to the progression of female staff in the University.

Professor Alison Fell, School of Languages, Cultures and Societies: winner of a 2015 Vice-Chancellor's Impact Award for the Legacies of War project.

Dr Andrea Utley, School of Biomedical Sciences: was joint winner of the Cutlers’ Surgical Prize 2015, one of the most prestigious annual prizes for innovation in the design of surgical instruments or surgical techniques.

Dr Anja Schmidt, School of Earth and Environment: won the renowned George Walker Award for Volcanology from the International Association of Volcanology and Chemistry of the Earth’s Interior.

Professor Karen Lucas, Institute for Transport Studies: awarded the prestigious Edward L Ullman award by the Association of American Geographers for her work on transport and social inclusion.

Lucy Bailey, Student, School of Politics and International Studies: named Yorkshire Woman of Achievement in Education 2015 for her tireless campaign to improve the support available for Leeds students living with mental health problems.

Professor Michelle Peckham, School of Molecular and Cellular Biology: elected Vice President of the Royal Microscopical Society (RMS), and in 2016 assumes the Presidency, only the third woman to hold that prestigious position in the Society’s 175-year history.

Professor Ruth Wilcox, Institute of Medical and Biological Engineering: one of three University academics to have been honoured with Suffrage Science Awards, supported by the Medical Research Council (MRC) and the Royal Society.

Sannia Farooque, student, School of Chemistry: selected as one of the Royal Society of Chemistry’s 175 ‘faces of chemistry’ celebrating diversity in science.

Professor Vivien Jones, Pro-Vice-Chancellor for Student Education, 2006-2016: under Vivien’s leadership, Leeds has established a reputation for excellence and innovation in taught student education.

See the Roll of Honour 2016 list and watch a recording of the Women of Achievement event.