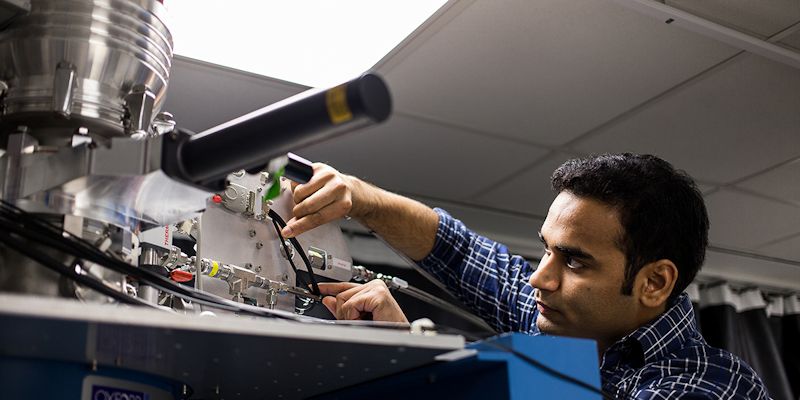 Research funded by the EPSRC and the University of Leeds has developed a new technique to manipulate terahertz waves, the part of the electromagnetic spectrum between infrared and microwaves.

While previously it was possible for terahertz light to be manipulated by arrays of nanostructures, the researchers have now found a way to use a single nanostructure as a filter for terahertz waves, whose properties depend on how much voltage is applied.

The researchers found that, by passing terahertz radiation through a tiny region of semiconductor, with gates on its surface, they could control the spectrum of the radiation passing through it.

The new technique embeds the nanostructure in a microscopic waveguide, in which it is split into three sections or “cavities”.

A voltage they apply controls how electrons in these cavities oscillate, and therefore the frequency of electromagnetic radiation that each cavity can transmit.

The new technique has exciting research applications, as it can be applied to the study of almost any nanoscale electronic component.

It could be used to measure the properties of ultrafast transistors built from nanostructures, for example, or of graphene (a single atomic layer of carbon). Experiments on both are now underway.

Professor John Cunningham, from the School of Electronic and Electrical Engineering, who led the research, said: “This has really exciting potential, because terahertz waves have a wide range of possible uses, but until now researchers have found it hard to make a compact single component which can control the terahertz waves which pass through it.

“Such tuning is a prerequisite for many applications, since it allows the waves to be shaped or modified, allowing information to be encoded in the signal.”

Dr Chris Wood, a University of Leeds Research Fellow, added: “We are delighted with these results. Our work in the area is at the forefront of on-chip terahertz science and technology worldwide, and I very am grateful for the long-term support offered by the University which has allowed us to bring this complex 5-year project to completion.”

The research is published today in Scientific Reports.

Contact University of Leeds press office on pressoffice@leeds.ac.uk or call 0113 343 4031

The Engineer - Probing the properties of individual nanoscale objects

Business Standard - Use unique sounds to access your data faster