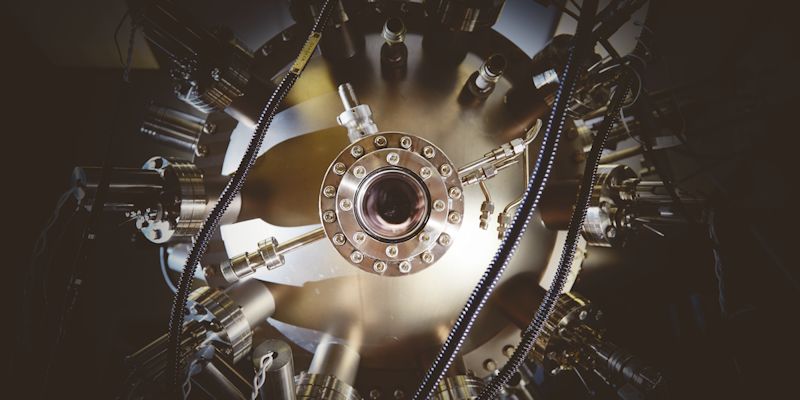 The University of Leeds' School of Electronic and Electrical Engineering is leading the way in terahertz frequency research on a global level.

“Our current research is a carefully considered balance of ‘blue sky’ discovery-led work and challenge-led research where the end-user is integral. Both are vital in ensuring that our research remains innovative yet has practical impact too.” says Professor Giles Davies, who, along with colleague Professor Edmund Linfield was honoured as a joint winner of the 2014 Institute of Physics Faraday Medal and Prize.

Whilst both refer to the award almost in passing, this esteemed gold medal was awarded in recognition of their (and their research teams’) outstanding and sustained contributions to understanding the physics and technology of the far-infrared (terahertz) spectral range over a period of some twenty years.

It’s almost two decades since Davies and Linfield – now Professors of Electronic and Photonic Engineering, and Terahertz Electronics, respectively – began their research into terahertz frequency technology whilst at Cambridge. Relocating their research to Leeds, at a time when the University was investing in cutting-edge new laboratory facilities, gave them the opportunity to shape a world-leading research environment almost from the outset. 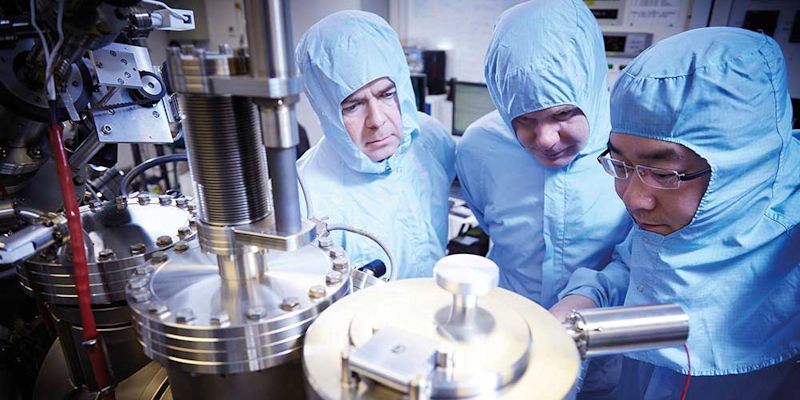 “Leeds already had a very strong reputation in the wider field by virtue of its internationally-recognized Institute of Microwaves and Photonics. Terahertz radiation lies in the part of the electromagnetic spectrum between the infrared and microwaves, and this is where we wanted to push our research” says Professor Davies, and the reasons why soon become clear.

What is terahertz science?

Terahertz radiation has a number of possible uses ranging from chemical analysis to security scanning, and from telecommunications through to medical imaging. A wide range of materials exhibit characteristic vibrational modes at terahertz frequencies, which means that they can be uniquely identified and analyzed by terahertz techniques. Furthermore, terahertz radiation can penetrate materials that block visible light, potentially allowing analysis of otherwise concealed objects.

However, despite these useful attributes, terahertz technology has proven stubbornly difficult to harness effectively: “Although it is possible to build large and expensive instruments that generate powerful beams of terahertz radiation, these instruments are only useful for a very limited set of applications. We need terahertz lasers that not only offer high power but are also portable and low cost.” says Professor Linfield.

Terahertz radiation can be produced using miniature lasers, known as quantum cascade lasers. Those being developed at Leeds are only a few square millimetres in size. The production of the lasers demands tailor-made semiconductor layers painstakingly assembled on a nanometre scale.

Professor Davies stated: “Terahertz radiation corresponds to much lower frequencies than visible and near-infrared radiation, which can be conveniently generated using conventional semiconductor lasers, such as those found in CD and DVD players. Suitable semiconductors necessary for terahertz lasers do not exist in nature, and so we have to create artificial semiconductor materials. We stack thousands of very thin layers of different semiconductors, one on top of the other, to create a kind of ‘club sandwich’. This is the basis for the terahertz quantum cascade laser. However this painstaking process takes around 12 hours and it’s imperative that every layer is of a specific thickness defined to an atomic-scale resolution - so we’re faced with the challenge of managing the whole process very carefully in order to be successful.”

Professor Linfield added: “The process of making these lasers is extraordinarily delicate. Layers of different purpose-made semiconductors such as gallium arsenide are built up one atomic monolayer at a time. We control the thickness and composition of each individual layer very accurately to build up a semiconductor material of between typically 1,000 and 2,000 layers. The recent record output power of our lasers is due to the expertise that we have developed at Leeds in fabricating these layered semiconductors, together with our ability to engineer these materials subsequently into suitable and powerful laser devices.”

What are terahertz waves?

Electromagnetic waves at terahertz (THz) frequencies are in the region of the electromagnetic spectrum between 0.3 and 3 THz. Terahertz waves are safe to use because they are non-ionizing and can pass through clothing, skin, paper, cardboard and plastic, wood, plastic and ceramics. They can also penetrate fog and clouds, but cannot penetrate metal, concrete or water.

Despite many valuable useful applications, the adoption of terahertz waves has been slow because of the limited output power from currently available sources. Terahertz waves lie between the optical and the microwave spectrum and cannot be efficiently generated by either scaling down optical sources like lasers or scaling up conventional microwave sources such as klystrons. Current moderate size terahertz sources can only generate a few milliwatts of average power and hence require expensive and complicated schemes for detection. Therefore, the lack of commercially available sources and detector for this frequency region lead to the term ‘Terahertz Gap’.

The record power in question has seen the Leeds team exceed a 1 Watt output power from a quantum cascade terahertz laser, a new record which more than doubles the previous mark. Professor Davies said:

“The University of Leeds has been an international leader in terahertz engineering for many years. This work is a key step toward increasing the power of these lasers while keeping them compact and affordable enough to deliver the range of applications promised by terahertz technology.”

This unique and exciting work has played a pivotal role in keeping the University’s profile high globally too. As Professor Davies explains, “Leeds is now one of the few places in the world where these specialised lasers are available. We’re inundated with requests for samples and currently supply a range of research departments in other world-class universities, including: Harvard University; École Normale Supérieure; Université Paris-Sud; Université Paris Diderot; Nanyang Technological University; and, the University of Queensland.”

Quantum cascade lasers are pioneering in the world of lasers, and different to anything that’s been traditionally used over the last 20 to 30 years. Whilst other parts of the spectrum have been widely explored, from radio and TV through to x-rays and optics, terahertz frequencies have largely been avoided due to the complexity of work involved.

In parallel to their development of quantum cascade lasers, the Leeds team are also working to use terahertz spectroscopy to characterise materials in a way that has not been possible before.

“Terahertz spectroscopy enables us to look at materials on a different level,” Professor Linfield explains. “It provides a different way of studying crystalline substances, seeing how the crystals vibrate or ‘breathe’ - its unique ‘fingerprint’ if you like, allows us to identify what a material is – something which can be very useful in the pharmaceutical industry. We can scrutinise drugs-of-abuse, cocaine and heroin for example, looking at ‘pure’ and ‘street’ versions for analysis purposes.We’ve examined explosives, too – including Semtex, RDX and PETN. Working closely with the Home Office and other organisations, we have identified the spectroscopic signatures of a number of explosives.”

While the ultimate role of terahertz technology is still evolving, it’s clear the work of Professors Linfield and Davies and their team has underpinned fundamental understanding of the interaction of terahertz frequency radiation with matter, and in particular the complex interplay of inter-molecular and intra-molecular vibrations. This is now being exploited by Leeds researchers across a range of disciplines from biology, chemistry and medicine, through to physics, materials science, and astronomy.

Working with the School of Chemistry, new technology for studying the composition of gases is being explored. Whilst with the Faculty of Biology, the technique is being used to provide valuable insights into the structure of proteins. The Schools of Physics and Astronomy, and Chemical and Process Engineering are also interested in the use of terahertz techniques in conjunction with their work in magnetic and piezoelectric materials, inter alia.

It is perhaps in space where one of the most compelling applications of terahertz engineering may lie.

The Leeds team is part of a project funded by the UK and European Space agencies to develop a satellite-based laser to quantify key gases involved in climate change in parts of the atmosphere that other technology cannot reach. Deployment on a satellite requires compact systems, and hence a quantum cascade laser provides a potential solution. The laser must be portable, durable and power efficient. Alongside other leading universities and commercial developers, Leeds is a partner in the LOCUS Project, aiming to develop a Low Cost Upper Atmosphere Sounder, which will meet this need.

“Quantum cascade lasers suitable for use on board satellites could be used to measure gases in the atmosphere as part of investigations into climate change, or for more fundamental missions to investigate the atmosphere of Jupiter’s moons, for example” says Professor Davies.

This work is part of a collaborative programme involving colleagues from across the University, including Professor John Plane’s Atmospheric and Planetary Chemistry Group from the School of Chemistry. As Professor Davies notes:

“The Chemistry team provide the science, and we will provide the technology. The potential is that if we can develop the right instrument, it could very well be deployed in future space missions.”

If successful, the satellite laser would also move Davies and Linfield closer to one of their long-term research goals, the ability to assimilate terahertz technologies into integrated systems, enabling research and applications in other areas. The future for terahertz technology, for so long one of the less explored regions of the electromagnetic spectrum, is beginning to look very exciting indeed.

Almost 20 years of pioneering work on terahertz science and technology was recognized by Professor Giles Davies and Professor Edmund Linfield winning the 2014 Faraday Medal and Prize. 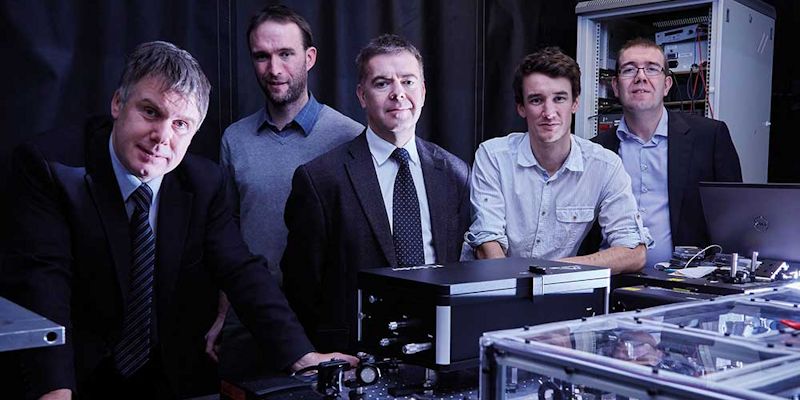 The Institute of Physics’ esteemed gold medal prize was awarded in recognition of their and their colleagues’ outstanding and sustained contributions to the physics and technology of the far-infrared (terahertz) frequency region of the electromagnetic spectrum.

Their work is now being exploited by researchers across a range of disciplines from biology, chemistry and medicine, through to physics, materials science, and astronomy.