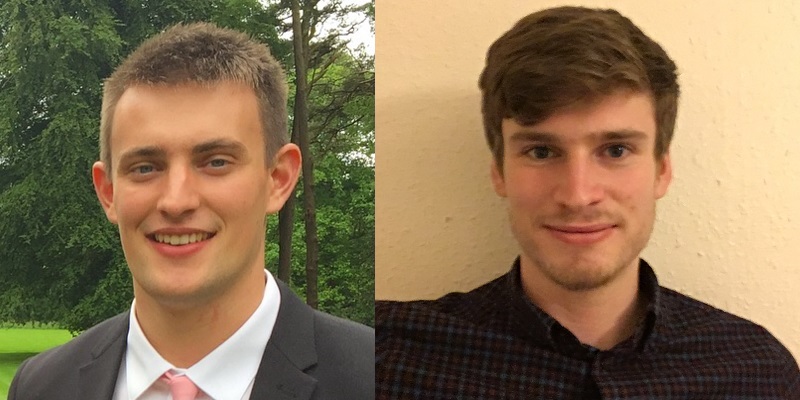 Two students from the Faculty of Mathematics and Physical Sciences have been recognised in the inaugural University of Leeds Beaumont Awards, announced today.

The winners are Harrison Oates and Joseph Parr.

These awards recognise excellence in undergraduate research projects in the areas of Biological, Environmental and Physical Sciences, Engineering, and Medicine and Health. The judges are looking for projects which ‘display the greatest potential to impact on society.’

The awards are inspired by the life and work of Michael Faraday, whose discoveries were crucial in the development of technology innovation.

Professor Adam Beaumont, Founder and CEO of aql, a Visiting Professor in Cyber Security at the University of Leeds, and the sponsor of the awards said:

When I was studying for my finals, I remember feeling as though I wasn't good enough. I remember working really hard. Particularly at my final year project and trying to make sure it was solving a real world problem. When it came to my graduation day, I found that I'd won the Jordan Award for that project. I remember what that felt like. I was organising my new office last year and discovered the award and it evoked those feelings again and I want to pass that feeling on to others. These awards are given to those who have not only delivered an exemplary and impactful final year project, but who have articulated their passion for the change it could have on society. I'm looking for our future leaders and change-makers. Faraday was passionate about delivering science to the masses and impassioned those for whom science, or aspiration was out of grasp.

The Beaumont Awards reflect the University’s commitment to research-led education and research-based learning.  Final-year undergraduate research projects are an important part of the Leeds student experience and often result in some truly outstanding work.  Adam Beaumont’s generosity borne of his own experience will inspire our students to reach for new heights of academic excellence.

Eleven students in total will be awarded £500 cash, a medal, support from SPARK (the University of Leeds’ student business start-up service) and a place at the SPARK summer boot camp as part of their prize.

The winners will be announced at a ceremony tonight.

A full list of winners and information about the awards can be found here.