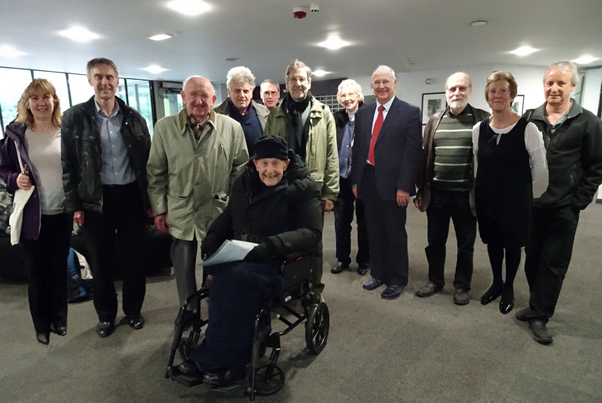 The inaugural Professor Ian Ward lecture, hosted by the Soft Matter Physics Group at Leeds, was held on Monday.

It was held in honour of the outstanding contribution of Professor Ian Ward F.R.S to the group, to the University as a whole, and more widely to the National and International Polymer Physics community.

The picture above shows a number of the happy band who attended this annual lecture.

The inaugural speaker was Professor Phil Coates (fourth from the right), Professor of Polymer Engineering at the University of Bradford and the Director of the internationally recognised Polymer Interdisciplinary Research Centre (IRC) (across the Universities of Leeds, Bradford, Durham and Sheffield).

Professor Coates has had a long standing association and collaboration with Professor Ward (who was the first director of the IRC on its inception in 1989), stretching back over 40 years. Professor Coates and his team are leaders in the area of the structure and properties of solid polymers and polymer composites, combining fundamental scientific research with strong industrial links, a theme which was pioneered by Professor Ward.

It was great event, allowing for wonderful reflections of Ian’s contribution from both Professor Coates and our head of School Professor Helen Gleeson (back left). Phil gave a very interesting talk, building up from Ian’s pioneering work and highlighting the new areas that Bradford have taken this forward. Phil also highlighted some of Ian’s inventions, including the single polymer composites work currently exploited by Samsonite in their successful innovative luggage range (Cosmolite etc). The event proved a great opportunity for catching up with friends and colleagues across the sites of the IRC. Thanks to Glenys Bowles (second right) and Ella Gould (off stage right) for help in organising the event and we understand that both Ian, and his wife Margaret (fifth from the right) had a lovely evening. Thanks again to Phil for agreeing to gives this inaugural lecture.