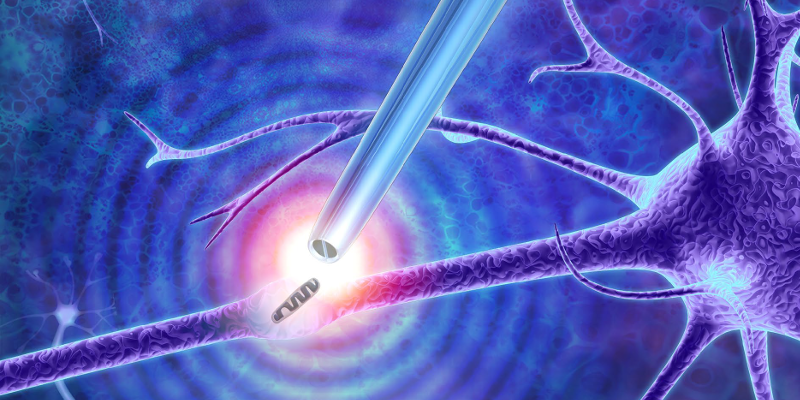 Newly-developed "nano-tweezers" created by university researchers can for the first time extract single molecules from live cells without destroying them – solving a long-standing research problem.

The research could help scientists in building up a "human cell atlas", providing new insights into how healthy cells function and what goes wrong in diseased ones.

Dr Paolo Actis, from the School of Electronic and Electrical Engineering at the University of Leeds, has been a key part of the research programme, collaborating with senior chemistry professors at Imperial College London on the interdisciplinary challenge.

Dr Actis has just received €4million from the European Commission to lead a new project called SENTINEL which will train academic and industry researchers to apply these type of "nanoelectrochemistry" techniques to challenges from understanding the resistance of cancer to therapy, to neurodegeneration. The project will also aim to develop the next generation of energy materials.

The tweezers are formed from a sharp glass rod terminating with a pair of electrodes made from a carbon-based material much like graphite. The tip is less than 50 nanometres in diameter and is split into two electrodes, with a 10 to 20-nanometre gap between them. A nanometre is one-millionth of a millimetre.

By applying an alternating voltage, this small gap creates a powerful highly localised electrical field that can trap and extract the small contents of cells such as DNA and transcription factors – molecules that can change the activity of genes.

Dr Actis, pictured above, said: “We are continuously expanding our knowledge on how cells function, but many unanswered questions remain. This is especially true for individual cells that are of the same type, such as brain, muscle or fat cells, but have very different compositions at the single-molecule level.

“However, traditional methods for studying these differences typically involve bursting the cell, resulting in all of its contents getting mixed. This results in the loss of spatial information – how the contents were laid out in relation to each other, and dynamic information, such as molecular changes in the cell over time.

“The development of these nanoscale tweezers therefore solves a major problem, and could help scientists in the future improve understanding of how our bodies work.”

The method is based on a phenomenon called dielectrophoresis. The tweezers generate a sufficiently high electric field enabling the trapping of certain objects such as single molecules and particles. The ability to pick out individual molecules from a cell sets it apart from alternative technologies.

The technique could potentially be used to carry out experiments not currently possible. For example, nerve cells require much energy to fire messages around the body, so they contain many mitochondria to help them function. However, by adding or removing mitochondria from individual nerve cells, researchers could better understand their role, particularly in neurodegenerative diseases.

Professor Joshua Edel, from the Department of Chemistry at Imperial College London, who led the research programme, said: “With our tweezers, we can extract the minimum number of molecules that we need from a cell in real time, without damaging it.

“We have demonstrated that we can manipulate and extract several different parts from different regions of the cell – including mitochondria from the cell body, RNA from different locations in the cytoplasm and even DNA from the nucleus.”

Dr Alex Ivanov, also from Imperial, explained that nanoscale tweezers could be a vital addition to scientists’ toolbox for manipulating single cells and their parts.

Extracting individual molecules from the same cell with unprecedented spatial resolution and over multiple points in time could provide a deeper understanding of cellular processes, and establish why cells from the same type can be very different to each other, he said.

At Leeds, Dr Actis is working alongside Dr Lucy Stead from the Faculty of Medicine and Health to use this technique to study how brain tumours resist therapy, in a project funded by the Brain Tumour Charity.

The development of the nanoscale tweezers and their application is a prime example of the type of interdisciplinary work which will be carried out by the University’s new Bragg Centre for Materials Research and the national Henry Royce Institute, of which Leeds is a founding member.