Measuring hydroxyl radical at 4730 meters on the Tibetan plateau 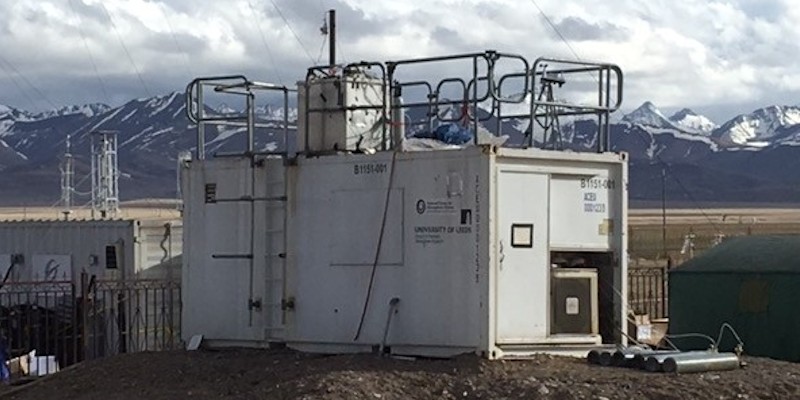 Researchers from the School of Chemistry were invited to participate in a joint field campaign in Tibet with Peking University, to measure concentrations of the OH radical at Nam Co.

With an atmospheric pressure of only ~ 0.55 Atm, Nam Co is representative of the Tibetan Plateau, a much understudied part of the atmosphere, yet representing a significant area of about a million square miles, owing to a lack of previous composition measurements.

The Leeds Chemistry team, Dr Lisa Whalley and PhD students Eloise Slater and Joanna Dyson, have been on site with the University of Leeds FAGE container, gathering data from this very scenic location. They have provided measurements of the hydroxyl radical (OH) during this campaign.

This is the highest altitude on the Earth’s surface from which concentrations of the hydroxyl radical (OH) have ever been measured. The levels of OH the team have observed indicate that there is active photochemistry on the Tibetan Pleateau.

Why is this important?

The highly reactive hydroxyl radical, OH, is the major oxidising compound in the troposphere, and governs the atmospheric lifetimes of many trace species of biogenic and anthropogenic origin. OH controls non-CO2 greenhouse gases like methane (80% of it removed by OH), and so it is important that OH levels are known in different environments.

Levels might be expected to be significant as concentrations of ozone (an OH source) on the Tibetan plateau are elevated due to transport down from the stratosphere. As well as measuring OH, they have also provided measurements of HO2 and RO2 radicals, OH reactivity and solar flux.

The research team were in Tibet until late May.