Flying over the African wetlands to find sources of methane 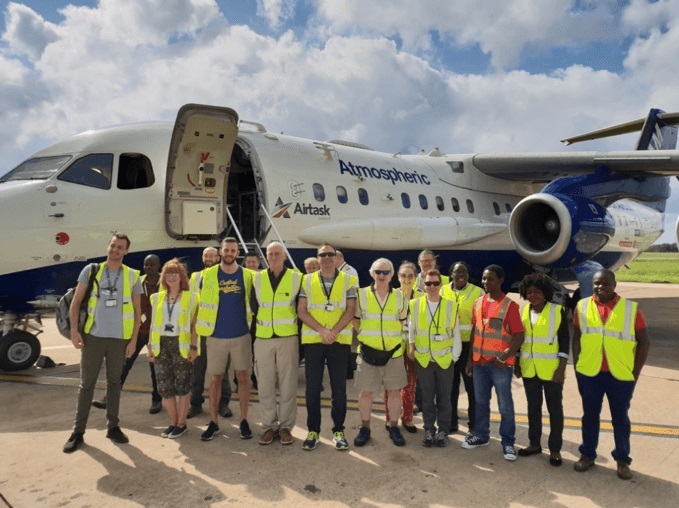 ​​​​​​​Researchers from the School of Chemistry recently took to the skies in a project to measure methane emissions from tropical wetlands in Africa.

As reported by Nature, scientists flew above the swamps and farmlands of Zambia and Uganda in an aeroplane loaded with measuring instruments, in a bid to discover the source of an unexplained global spike in methane emissions that has been occurring since 2007.

Among those taking part from the School of Chemistry were Dr Trevor Ingham, a senior research fellow who is funded by the National Centre for Atmospheric Science, and PhD student Grace Ronnie, who is supervised by Dr Lisa Whalley and Professor Dwayne Heard.

The research team spent two weeks in January and February 2019 taking atmospheric samples above papyrus swamps, agricultural fires and livestock farms. Early results indicate that Africa is playing a major role in the global methane cycle, which may be connected to microbe populations in its vast wetlands, as well as smoke from fires and emissions from livestock.

During the Methane Observations and Yearly Assessments (MOYA) and ZWAMPS projects, the University of Leeds supplied and operated one of the instruments used aboard the plane – a laser-based device to measure formaldehyde, the simplest carbonyl molecule, which is a key atmospheric intermediate.

“On a per molecule basis, methane is about 25 times as potent a greenhouse gas as CO2, yet the sharp increase in methane seen over the last decade or so is not fully understood. One idea is that emissions from tropical wetlands may have changed owing to climate change, another is that rate of methane removal via its reaction with the hydroxyl radical, OH, may have changed.

“The reaction of OH with methane leads to the formation of formaldehyde (HCHO), the molecule that we measured during MOYA/ZWAMPS on the FAAM aircraft using laser-induced fluorescence spectroscopy.”

Methane is a potent greenhouse gas: while it doesn’t stay in the atmosphere as long as carbon dioxide, its efficiency at absorbing heat can make it far more damaging in the short term. Researchers are trying to get to the bottom of a mysterious global rise in methane emissions that began around 2007.

The research team will be paying particular attention to the isotopic signatures of their samples. The lighter carbon-12 isotope indicates methane produced by bacteria in swamps and wetlands, for example, while methane with the heavier carbon-13 isotope is more likely to come from fossil fuels.

Using computer models combined with these data, researchers can build up a picture of where the world’s methane emissions are coming from and how they are produced. Africa is suspected to be a major source, but data from the continent remains sparse – something MOYA is trying to rectify.