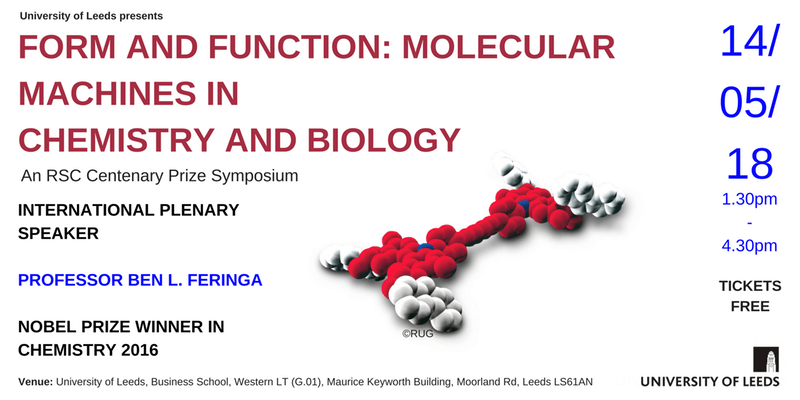 The University of Leeds welcomes a prestigious keynote speaker to the RSC Centenary Prize symposium “Form and Function: Molecular Machines in Chemistry and Biology”.

Dr Ben Feringa, who in 2016 received the Nobel Prize in Chemistry, will address students and staff with a lecture on molecular switches and motors.

Molecular nanotechnology – a discipline spanning chemistry, physics and materials science, and with a wide range of potential applications in areas such as healthcare, smart materials, sustainable energy and manufacturing – is an exciting field of study. First conceptualised by Richard Feynman in the 1950s, it’s only relatively recently that scientists have begun finding ways to put the theory into practice.

Dr Feringa has been a pioneering researcher in this regard, notably through his development of the world’s first molecular motor in 1999. The molecule was constructed akin to two small rotor blades, joined with a double bond between two carbon atoms. A methyl group was attached to each rotor blade, forming “ratchets” that forced the molecule to keep rotating in the same direction.

Dr Feringa’s molecular motor has since been optimised by the work of his research group, and in 2014 recorded a speed of 12 million revs per second. In 2011, the research group also built a four-wheel drive nanocar: a molecular chassis that held four motors functioning as wheels. When the wheels span, the car moved forward over a surface.

It was this work that led him to receive the Nobel Prize in Chemistry, jointly with Jean-Pierre Sauvage and Sir J. Fraser Stoddard, in 2016. He and his fellow prizewinners were praised by the Royal Swedish Academy of Sciences for creating “a toolbox of chemical structures that are used by researchers around the world to build increasingly advanced creations”.

The symposium is free, but registration is essential. Tickets can be booked via EventBrite.