Namrah Shahid is a postgraduate researcher based in the School of Chemistry, where she is studying for a PhD in ‘spin states in base metal catalysis.’ She is supervised by Professor Malcolm Halcrow, who is a member of the Crystallisation and Directed Assembly research group, and is co-supervised by Professor Patrick McGowan.

Pursuing a PhD in inorganic chemistry

Namrah decided to pursue a PhD primarily because of her passion for the subject. She explained the topic of her research and how it is related to pharmaceutical and agricultural industries. Namrah said:

“There are two major elements to my project: spin-state behaviour and catalysis. The former allows us to synthesise molecules that can respond with different magnetic behaviours depending on the conditions applied and the chemistry of the molecule.

“This topic has applications in the field of molecular electronics where these molecules can be used to mimic a specific binary system at the molecular level. The catalysis aspect aims to synthesise a metal-based catalyst to speed up common reactions used in the pharmaceutical and agricultural industry.”

Namrah also described how studying for a PhD has allowed her to develop both personally and professionally. She said:

“I knew I loved inorganic chemistry, and so as long as I chose a PhD in that discipline I knew I would be happy. My supervisor identified my research ideas as being suitable for a funded project that was being advertised. I am quite fortunate in the sense that I am strong in all areas of chemistry, so I could follow what I truly enjoyed.

“Aside from the overall aim of contributing to advances in research in the field, contributing to publications and developing essential skills as a researcher has been a highlight. I hope to develop even more as a confident person, as an independent thinker, as being a critical thinker, and scientifically knowledgeable.”

I hope to develop even more as a confident person, as an independent thinker, as being a critical thinker, and scientifically knowledgeable.

Conducting practical experiments and analyses makes up a large part of Namrah’s time. Having an interdisciplinary focus, she uses facilities within the School of Physics and Astronomy as well as Chemistry. She also gets the opportunity to visit different facilities.

“I’m in the lab during office hours working on experiments,” Namrah explained. “I do a lot of analysis work using specialised equipment, such as the X-ray Diffractometer. I spend at least one day per fortnight in the Condensed Matter lab in Physics and Astronomy, where I run magnetic measurements on my metal complexes and for the rest of my research group. I visit the Diamond Light Source Synchrotron facilities twice a year to obtain data as well.” 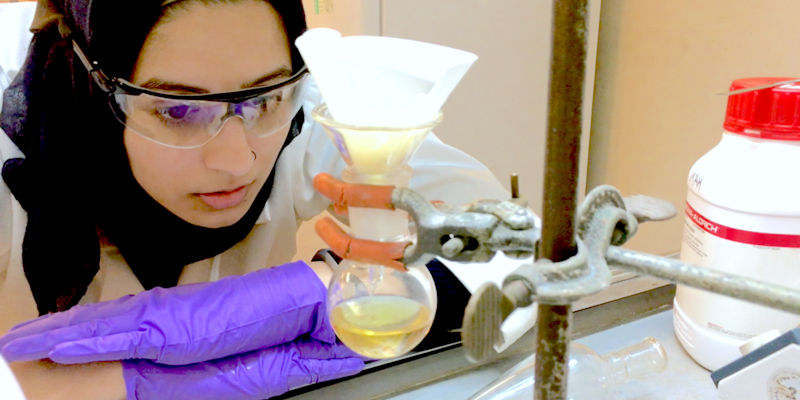 Namrah conducts practical experiments using a mixture of different labs and facilities, having an interdisciplinary focus

After enjoying her Masters research project on ‘ruthenium-based catalysts,’ Namrah wanted to continue her studies as it was what she really enjoyed. Due to the quality of her work, she was approached by three different staff members recommending her for funded opportunities.

“I had become so invested in my masters research that the opportunity proposed by my supervisors at the time to extend the work into a PhD project seemed quite attractive,” said Namrah. “I was in a very fortunate position however, as alongside this offer, I was approached by two other members of staff with offers for two other PhD projects with them, as well as holding a PhD offer at the University of York.”

She continued: “I was extremely honoured to be in such a position. I think my academic record, which was well known to staff in the school of chemistry, had a lot to do with this. When I had three offers, there was no mistaking that I was destined to do a PhD in Chemistry.

“I weighed up the many pros and cons between the three offers and decided to follow the supervisor whose area of research I most enjoyed. I picked my supervisor, Malcolm Halcrow, mostly based on how much I enjoyed his lectures at undergraduate level, and I do not regret the decision I made.”

I picked my supervisor, Malcolm Halcrow, mostly based on how much I enjoyed his lectures at undergraduate level, and I do not regret the decision I made.

After being identified as a fantastic PhD candidate, Namrah was presented with projects attached to funding opportunities. The project she chose was funded by the Engineering and Physical Sciences Research Council (EPSRC). Funded projects are research opportunities are available to browse and explore on the University’s PhD database.

Namrah said: “I have funding which was secured by my supervisor from the EPSRC, and with this the University of Leeds covered my tuition fees with a scholarship. I am eternally grateful for the funding, for which I could not be doing this PhD without.”

After completing her PhD, Namrah explained she would like to go into teaching within the higher education sector. She has enjoyed lecturing and teaching undergraduate students on her PhD.

“I have thoroughly enjoyed my time Lab Demonstrating to undergrads and supervising masters students,” Namrah said. “Even from when I was an undergrad, I was constantly approached by my peers for help and I was often told that I’m a great teacher. I am aiming next for a teaching fellowship or junior lecturer position in chemistry; despite how rare these posts are, I’m committed to trying.”

As a British-Pakistani Muslim girl,  I want to be a role model to incoming undergraduates who may resonate with me.

She added: “As a British-Pakistani Muslim girl, I want to be a role model to incoming undergraduates who may resonate with me. I want to be the role model I never had: being up there delivering a lecture or seminar to so many students would be an incredible way to do this and inspire so many.”