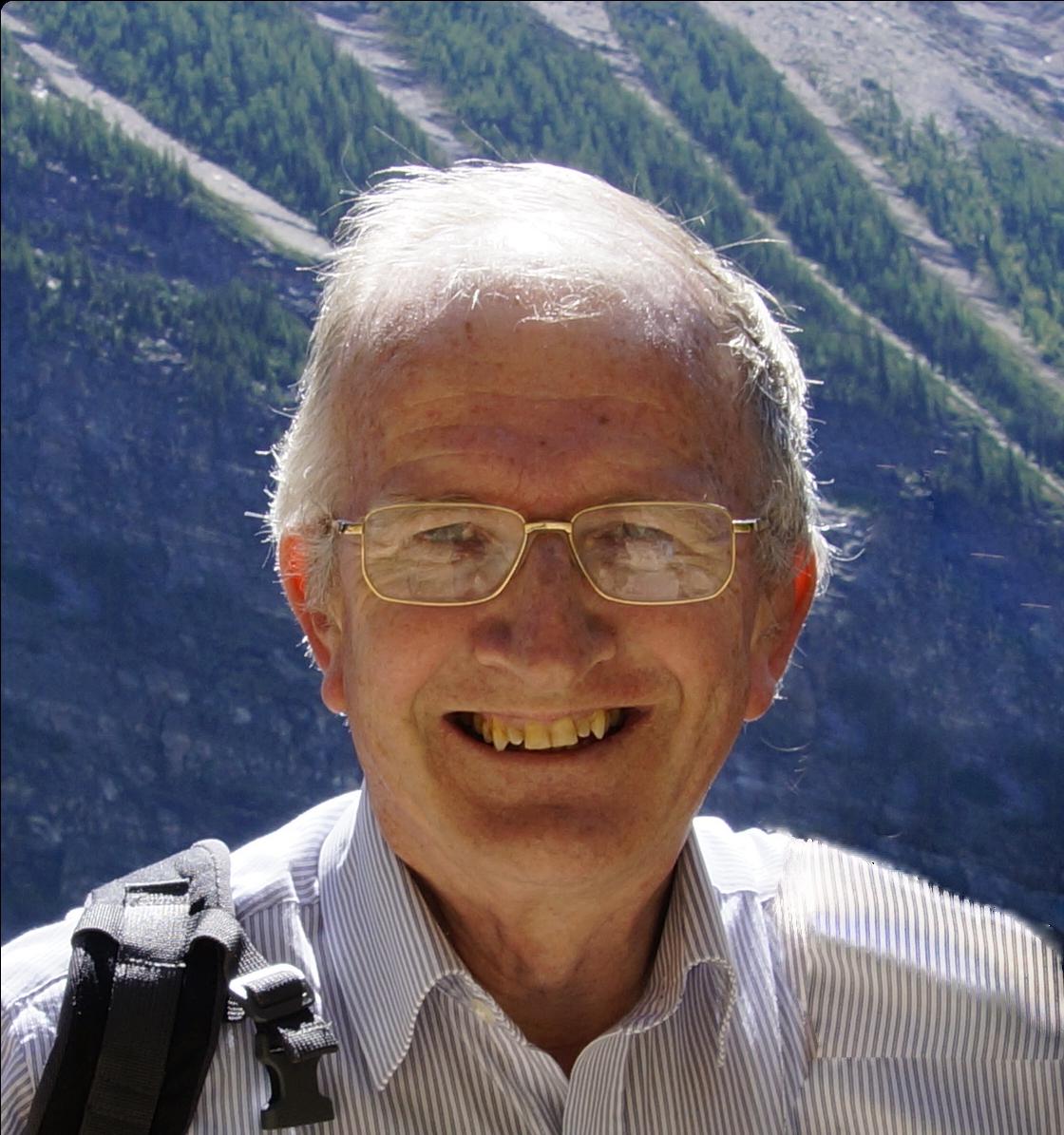 Professor Andy McIntosh (Leeds) DSc, FIMA, C.Math, FInstE, CEng FInstP, MIGEM, FRAeS holds an Emeritus chair in Thermodynamics and Combustion Theory at the University of Leeds, and up to 2014 was employed at the University in the School of Chemical and Process Engineering. He also is an adjunct Professor at Mississippi State University USA.

After gaining a first class honours degree in Applied Mathematics from the University of Wales (Bangor) in 1973, he worked at the Royal Aircraft Establishment in Bedford for 4 years before doing research under Professor John Clarke FRS leading to a PhD in the theory of unsteady premixed laminar flames at Cranfield University in 1981. He came to Leeds in 1986, gained a DSc on the mathematical modelling of unsteady combustion processes within gases, fluids and solids from the University of Wales (Bangor) in 1998, and was awarded a personal chair at Leeds in 2000. A chartered mathematician and engineer, and author of over 200 papers and articles, his research has been in combustion in fluids and solids and he has lectured widely internationally and researched in these fields for over 40 years.

His work has also included investigations into the fundamental link between thermodynamics and information, and in recent years he has been involved in research in the area of biomimetics where the minute combustion chamber of the bombardier beetle has inspired a patented novel spray technology with applications to fuel injectors, pharmaceutical sprays, fire extinguishers and aerosols. This research was awarded the 2010 Times Higher Educational award for the Outstanding Contribution to Innovation and Technology.

Overview of Education, Employment and Awards

Nov 2010                         Times Higher Educational Award for Outstanding Contribution to Innovation and Technology. This was granted for developing an innovative spray technology based on the bombardier beetle. 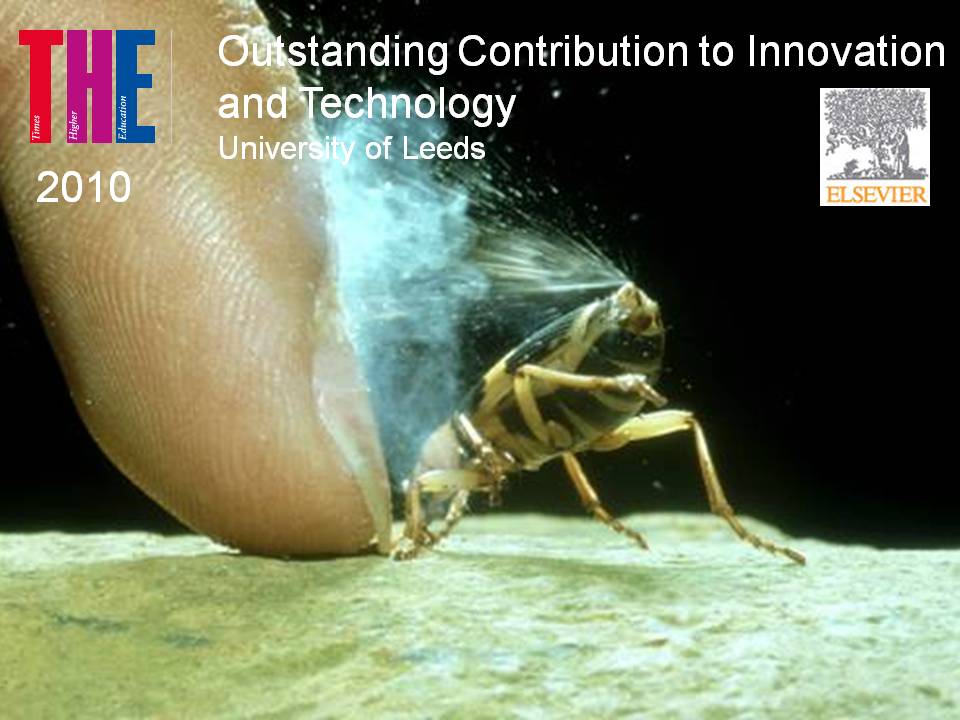 The research of Professor Andy McIntosh has included combustion investigations involving fluids (the interaction of pressure waves with flames, fire and smoke movement) as well as solids. In the area of heterogeneous combustion he has a number of research investigations concerning the modelling of ignition, char formation in polymers and the dangers of thermal runaway of reactive substances. Though this includes traditional fuels such as coal, it may also include biomass, agrochemicals,and anything where chemical reactions are involved. His latter work on biomimetics (the study of innovative engineering inspired by nature) has been particularly well publicised with the unusual work on a patented spray device inspired by the bombardier beetle. This has applications to fuel injectors, pharmaceutical sprays, aerosols and fire extinguishers.

Interaction of acoustics and flames. With British Gas sponsorship, a PhD programme was conducted where a Rijke Tube burner was built and a simple theory tested concerning the acoustic transfer functions describing oscillating heat transfer of a flame near a surface. Such a mechanism encourages resonance in the tube. The principle of this type of resonance has been established in a number of practical applications where industry is seeking to eliminate it - domestic and industrial boilers, gas turbines etc.

Low temperature autoignition of blended coals. This work investigated the low-temperature auto-ignition behaviour of different types of coal. This is because power stations now receive coal from many locations around the world, and do not rely solely on one source. Consequently the effect of blending different types of coals is important inclusing their self-ignition properties.

Ignition of combustible fluid and vapour within porous insulation material. Many incidents have occurred in the chemical engineering industry where combustible fluid has leaked into porous material and then (days later) ignited. Collaborative projects with Professors Brian Gray (Australia) and Graeme Wake (New Zealand) have led to significant advance sin this field.

Polymer ignition - use of additives to retard ignition. The charring of textiles and furnishings was studied as a means of retarding ignition. Support was obtained from the Raychem company which makes wire cables and is concerned for the safety of the polymer sheathing round the wires.

Catalytic ignition - The ignition behaviour of catalytic devices (such as catalytic converters in cars) has been studied. The prediction of under what conditions (temperature and inlet flow of gases), ignition will or will not occur, has been obtained through these investigations.

Hot spot ignition - This project addresses the ignition behaviour of hazardous materials where there is an existing hot spot already present, due to a hot pipe or some such object nearby. Counter intuitive behaviour has been investigated and collaboration has been ongoing with Syngenta Ltd.

Radiant burners - Investigations were made concerning a new type of metal fibre surface burner. The analysis revealed the practical operating regions for a surface burner and predicted the flashback and blow-off conditions. Another research group at Purdue University has also picked up this method in the last 2 years.

Ignition of explosives – In collaboration with Orica (Mining) mathematical modelling of the combustion process involved in the ignition of Ammonium Nitrate based explosives has been undertaken with a view to understanding the double combustion wave phenomenon that has recently been observed. This is heavily dependent on the two phase nature of the process and the role of pressure in these processes is also very significant. Competitive endo-exothermic reactions in the presence of an advective flow  In fluids a strained flow of a reactive fluid can lead to unusual effects due to the strong dependence on the competitive reaction history. The interest of this work centres on situations in which mixing is combined with competitive chemical reactions in laminar flow.Combustion in Nature – a novel spray device inspired by the Bombardier Beetle In recent years work on understanding combustion processes in nature has been undertaken, particularly the investigation into the combustion chamber of the bombardier beetle, with a view to possible application of the extremely efficient ejection device to spray engineering – such as in fuel injectors in car engines and gas turbines, pharmaceutical sprays and fire extinguishers. The work began with an EPSRC grant in this area and has progressed to direct industrial funding and development of a spin out company. The work was awarded the 2010 Times Higher Educational Award for Outstanding Contribution to Innovation and Technology.

The current work continues to explore industrial applications of this novel technology, and involves building a fire extinguisher prototype in a US university based on the valve system of the bombardier beetle, such that a combination of water and steam can be ejected a distance of 10 metres from a chamber approximately 5 cms. long. By this principle a much more efficient use of water is made, particularly for fighting wild fires such as have been seen in recent years in California. This will enable water packs carried on the back of firefighters to be used very effectively and from a safe distance.

Beheshti, N. and McIntosh, A.C. “The bombardier beetle and its use of a pressure relief valve system to deliver a periodic pulsed spray” Bioinspiration and Biomimetics (Inst of Physics), 2, pp.57-64, 2007.

McIntosh, A.C. and Beheshti, N. US Patent granted Feb. 3rd 2015 US patent number US8944173 “Apparatus and method of extinguishing a fire using a vapour explosion process.”

A unique spray system has been developed in conjunction with Swedish Biomimetics 3000.

For the subjects below please see list of publications

My five most recent selected publications

My other selected publications